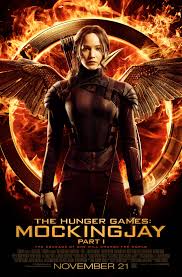 First off, I will start off by saying that, OMG THIS WAS AMAZING! WITH THE SINGING AND THE EXPLOSIVE ARROWS AND PETTA!
I enjoyed this so much. From the moment it started to the end. It made me cry at some parts and even laugh... but i have a twisted sense of humor.
Mockingjay Part 1 is much darker than the previous films but to me it really captured the feeling of loss throughout the movie.
A lot of reviews are saying the pacing is too slow. It's slower than the others simply because there is no Hunger Games with solid action. This is the first time we have seen the whole gang not enter an arena. To me, it wasn't slow at all. It had enough action to keep me entertained while helping the plot along.
There was so many cool things that happened, Katniss sang 'The Hanging Tree', Jennifer Lawrence actually sounded good. Not the best voice I've ever heard. I was surprised  by how lovely it was though!
I knew it was going to happen as I've read the book (a review is coming soon) but it was still so sad to see Peeta being hijacked and attacking Katniss. It broke my heart to see him that way. The make-up team did a great job. He looked so worn out.

Gale... I don't know, I mean, I just never really cared too much about him. I didn't even feel bad when he told Katniss the only way she ever pays attention to him if he's in pain. I guess that makes me Team Peeta!
I was really disappointed that Haymitch wasn't in here too much, I love him.  I'm so glad that Effie is still around and she made me laugh a lot. Cinna... I knew he was dead but it still hurts. He was wonderful.
My favorite part is the part where President Coin lets Katniss and her camera crew go to District 8 to film. Where Katniss and Gale shoot down the Capitol planes and where she addresses President Snow, telling him one of the best quotes ever, "if we burn, you burn with us". It gave me chills and made me want to jump up and shout. I of course didn't other people were in the theater.
Go see this movie, it's worth it. You will not be disappointed at all. I enjoyed all 2 hours and 3 minutes if it.