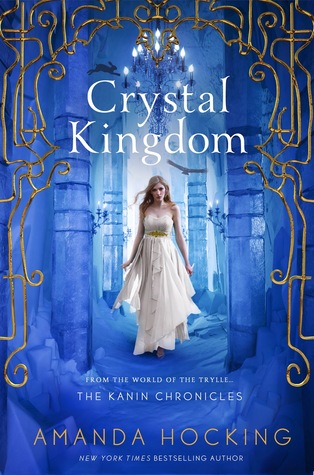 Cast out by her kingdom and far from home, she's the Kanin people's only hope.
Bryn Aven - unjustly charged with murder and treason - is on the run. The one person who can help is her greatest enemy, the enigmatic Konstantin Black. Konstantin is her only ally against those who have taken over her kingdom and threaten to destroy everything she holds dear. But can she trust him?
As Bryn fights to clear her name, the Kanin rulers’ darkest secrets are coming to light… and now the entire troll world is on the brink of war. Will it tear Bryn from Ridley Dresden, the only guy she’s ever loved? And can she join forces with Finn Holmes and the Trylle kingdom? One thing is certain: an epic battle is underway—and when it’s complete, nothing will ever be the
same…

Expected Release Date: 08/04/2015
*I received my ARC from the publisher in exchange for an honest review*
Crystal Kingdom starts right where Ice Kissed left off. Our main character (Bryan) is wanted and on the run, hiding from those who want her. Bryn thinks she's covering herself pretty good but she finds that is not the case when an old enemy shows up. After a long talk, they decide to work together and go out to gather support and if all goes well, an army from the other tribes to fight against The Queen and her followers. Will all end well? Read the book to find out.
I've heard that there is a love triangle in this book but I didn't really see it all. At one moment I could kind of see where one could've developed but Bryn was just too much in love with Ridley. So if anyone was having issues with that, it's settled.
To me, I will say there is no real happy ending and I hated that. That's why this book is rated lower than the other two. Lovable characters die and to me some of the ones that lived didn't really get a happily ever after. On a more positive note, you do get to see some of the other characters from the past series and if you've read that series that is pretty cool. I've never read it so it made no difference to me.
This was a very entertaining book I must say, lots of twists and then never knowing of the character you love is going to die sure keeps you on the edge of your seat! If you're looking for a thrill ride with some cool twists and likable characters then get this book, just seriously, be warned, don't get too attached to anyone.

1) “So, what do you say, white rabbit?” Konstantin Black asked.
2) “Trust and love can be very dangerous things,” he said finally.