Review - The Assassin and the Desert (Throne of Glass Prequel #3) 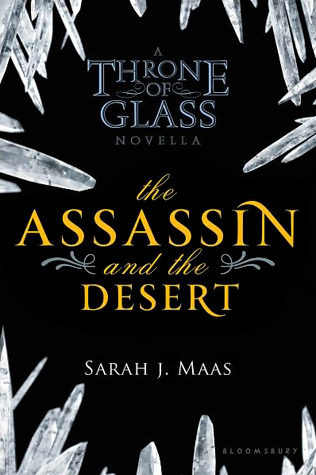 The Silent Assassins of the Red Desert aren’t much for conversation, and Celaena Sardothien wouldn’t have it any other way. She’s not there to chatter, she’s there to hone her craft as the world’s most feared killer for hire. When the quiet is shattered by forces who want to destroy the Silent Assassins, Celaena must find a way to stop them, or she’ll be lucky to leave the desert alive.

Celaena is sent to The Red Desert for punishment and she can't return to her master without a letter of approval from the Master of the Silent Assassins. She intends to do whatever it takes it get that letter. Upon her arrival she gets a roommate: Ansel. They quickly become friends. This makes Celaena happy as she has never had a female friend before but she is also sad about leaving her new friend when the time comes.
Celaena discovers that the Silent Assassins are often attacked by Lord Berick. The master sends Ansel to talk with him. While waiting Celaena meets a man who tells her of a traitor in the guild. She doesn't think too much of it. The pair end up stealing horses and the master makes them clean the stalls for punishment but then he finally decides to train our favorite assassin.
One night Ansel slips our assassin something to make her sleep and she wakes up in the middle of the desert and that's when she put it all together. Ansel is the traitor and so she rushes back to help the Silent Assassins and makes it just in time. She ends up letting Ansel live and the master gives her the letter, plus lots of gold!
Okay so... I hate to say this because I actually liked Ansel at first but I totally saw this coming when she didn't let Celaena into the palace with her... still didn't make it any less enjoyable though. I loved the action and all the other assassins seemed cool, much better than where she is from in Adarlan. So far though this one is my favorite and I can't wait to jump into the next one! Seriously sunflowers, if you haven't read this yet do it now!

1) “If you can learn to endure pain, you can survive anything. Some people learn to embrace it—to love it. Some endure it through drowning it in sorrow, or by making themselves forget. Others turn it into anger. But Ansel let her pain become hate, and let it consume her until she became something else entirely—a person I don’t think she ever wished to be.”
2) “Words could be just as deadly as steel.”