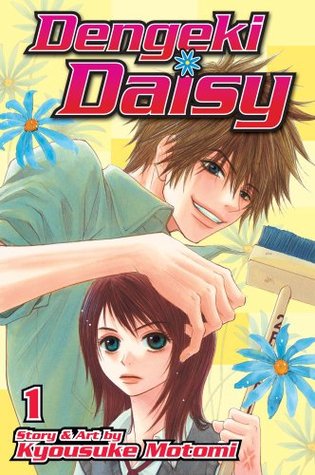 After orphan Teru Kurebayashi loses her beloved older brother, she finds solace in the messages she exchanges with DAISY, an enigmatic figure who can only be reached through the cell phone her brother left her. Meanwhile, mysterious Tasuku Kurosaki always seems to be around whenever Teru needs help. Could DAISY be a lot closer than Teru thinks?
One day at school Teru accidentally breaks a window and agrees to pay for it by helping Kurosaki with chores around school. Kurosaki is an impossible taskmaster though, and he also seems to be hiding something important from Teru...

Series: Dengeki Daisy
Volume: 1
Format: Digital
Published: 07/06/2010
Page Count: 192
Publisher: Viz Media
Want a copy?
Amazon, B&N, Viz Media, Book Depository
Manga Breakdown
Teru is a sixteen year old girl that lives alone. Her older brother died about a year ago and all he left her with is Daisy. A person she texts all the time. She even says that Daisy is the most important person to her. Though she has never meet Daisy in real life.


Through this volume she meets Kurosaki. Her school janitor after he comes to find the one who threw a baseball through the school window. When she confesses that she threw the baseball, he makes her 'pay with her body'.  Which means that she has to help him with his work around the school. But things start to happen... she finds out that Daisy is a hacker when he helps her out of a bad situation.

She doesn't know that Kurosaki is Daisy even as she gets closer to him. He even let her stay at his place after hers was broken into and ruined. Kurosaki acts like a jerk to her most of the time. But then he goes off and saves her or has a sweet tender moment that will just melt your heart. It's easy to see his feelings for Teru and the I wondered why he was such a jerk since he liked her but you find out in the end and it all makes sense. He caused her brother's death and doesn't feel he has the right to love her.

The art is nice. Some pictures to me are just too silly but then other's are just so lovely that is evens out nicely. This is a comedy so if you're in a bad mood it will makes me laugh and smile. I will be getting more of these volumes very soon! I want to know if Teru ever finds out about Daisy!

Have you read this manga? If so, did you enjoy it? Let me know below! Thanks for reading sunflowers.