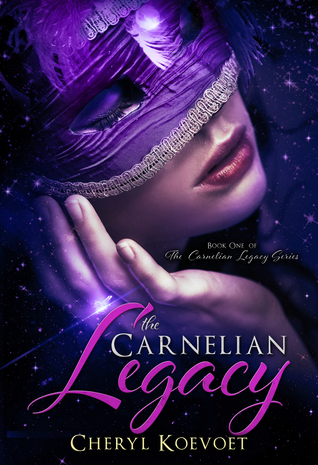 Marisa MacCallum always believed that the man of her dreams was out there somewhere. The problem is—he’s in another dimension.

After the death of her father, eighteen-year-old Marisa's life is on the verge of imploding. She seeks comfort on her daily ride through the woods of Gold Hill, but when a mysterious lightning storm strikes, she is hurled into the ancient, alternate dimension of Carnelia where she is discovered by the arrogant but attractive nobleman, Ambassador Darian Fiore.

Stranded in a world teeming with monsters, maniacs and medieval knights, Marisa is forced to join Darian on a dangerous mission to negotiate peace with his cousin and archenemy, Savino da Rocha. Along the way, she starts to see Darian's softer side and finds herself falling in love. But once she learns that he is locked into an arranged marriage, her heart shatters.

When Savino falls for her charms and demands her hand in exchange for peace, Marisa is faced with an impossible choice: marry the enemy of the man she loves or betray them both and become the catalyst for a bloody war.

Book Breakdown
Marisa has felt like an outsider for all her life, a feeling that gets worse when her father dies. She takes her horse for a ride on the day of his funeral and is transported to other realm. Where she just happens to be spotted by two men who speak.... popcorn logic. She follows them through their mission and naturally, stuff happens. They get attacked by some animals and she runs away... RUNS AWAY. She's a very weak character to me. I found myself wanting to smack her. She ends up falling in love with a man named Darian. A prince. But she got an offer of marriage from his cousin.
Marisa goes back and forth between wanting to be with Drarian and deciding to let him go. She even almost kills herself at one point but hears "God's" voice and doesn't. She now feels loved and safe. I dislike Marisa because she is seriously so freaking weak! Bella from Twilight was a stronger character than her. Anyway, she ends up being the lost princess and gets the guy. After a huge reveal and silly needlessness.
I also wish NetGalley had said this was Christian ... I wouldn't have touched this thing because the whole voice in the head bit really made me want to put the book down and just stop. I don't like reading Christian fiction. I have nothing against it, just not my cup of tea, at all. Though on a more positive side, I really love this author's writing. It seemed almost lyrical at some points. Beautiful!