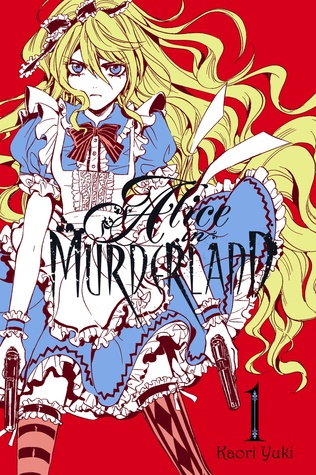 The Kuonji clan, owner of one of the world's top conglomerates, has a tradition: Once a month, family members attend a "Mad Tea Party." But at the latest gathering, the nine Kuonji siblings in attendance are shocked to hear a pronouncement issue from the lips of their mother, Olga-

"I'd like you children to now fight one another to the death!"

As chaos erupts, Stella, the fourth daughter, loses all reason, and suddenly a whole new Stella, complete with blonde hair and blue dress, comes out to play-!!


Author: Kaori Yuki
Genre: Gothic Horror (Manga)
Format: Hardcover
Release Date: 06/23/2015
Publisher: Yen Press
Manga Breakdown
So this manga starts off with a huge murder scene that makes no sense until later in the volume. Then we cut to our main character; Stella, in a classroom. She asks to leave suddenly because she had a family tea party to attend, one they have every month. Her classmates chalk it up to her being from the famous Kuonji family. They assume it's what all rich people do.
This tea party is special though, it's her eldest and favorite brother's nineteenth birthday. Their mother drops a huge bomb on them, only one of them can inherit the title as head of this powerful family. How to decide who wins? The last one standing. That's right, the adopted siblings will have to kill each other will only one remains. What a lovely family. Not.
No one likes this idea and Stella doesn't want to play this game but when Sid, the second oldest, kills Zeno, the oldest: Stella transforms into 'Bloody Alice' and kills his transformed state 'Jack the Ripper'. Their mother has been slipping something into their drinks every month, something that can allow them to live forever... if they keep taking at least once a month, or they will die. This also allows them to transform into this other person, thing. Not sure really.
Stella makes a pact with her mother to bring Zeno back to life and she'll win by killing all the others. Zeno will become her partner, the same way her mother kept their farther as her partner. This is the reason that each sibling was told bring their favorite person to the tea party.
So with Zeno back, though he's changed. He's not the brother she once loved anymore. That and the fact that she'd still freaking out over Blood Alice, makes things hard on her. There is a boy from the beginning that comes into play now though. Watching over Stella, helping her to see who really killed Sid's girlfriend. It wasn't Zeno, whom she thought might have eaten her.
Their family is kind of like vampires taking the life force from people, she thinks that what she did to Sid when she killed him. But Stella uses her brains and takes the advice of her new lookout and finds who really killed Sid's girlfriend and the is manga ends in a face off between the two. I can't wait to see who wins, though I'm sure it's Bloody Alice, Otherwise, there would be no series, makes sense to me.
I really like this manga, it's kind of confusing and I had to read it twice to fully grasp it but it's awesome. The action scenes are the best. I've been a fan of this mangka since Angel Sanctuary. I love the dark gothic feel she adds to everything. All the characters are clear cut and seem like their own selves which I love. All in all, I enjoyed this manga. I'd say give it a short. Did I mention it's hardcover!? Finally a hardcover manga! It's so beautiful!