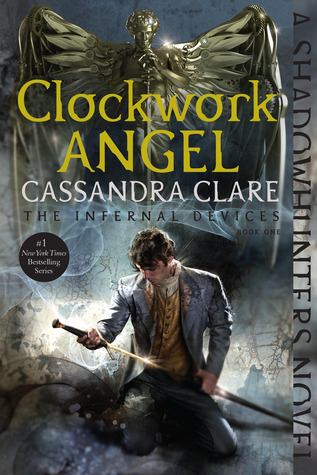 When Tessa Gray crosses the ocean to find her brother, her destination is England, the time is the reign of Queen Victoria, and something terrifying is waiting for her in London's Downworld, where vampires, warlocks, and other supernatural folk stalk the gaslit streets. Only the Shadowhunters, warriors dedicated to ridding the world of demons, keep order amidst the chaos.

Kidnapped by a secret organization called The Pandemonium Club, Tessa learns that she herself is a Downworlder with a rare ability: the power to transform into another person. What’s more, the Magister, the shadowy figure who runs the Club, will stop at nothing to claim Tessa's power for his own.

Friendless and hunted, Tessa takes refuge with the Shadowhunters of the London Institute, who swear to find her brother if she will use her power to help them. She soon finds herself fascinated by—and torn between—two best friends: James, whose fragile beauty hides a deadly secret, and Will, whose caustic wit and volatile moods keep everyone in his life at arm’s length…everyone, that is, but Tessa. As their search draws them deep into the heart of an arcane plot that threatens to destroy the Shadowhunters, Tessa realizes that she may need to choose between saving her brother and helping her new friends save the world…and that love may be the most dangerous magic of all.

Book Breakdown
Tessa receives a letter one day from her elder brother, who's in London, telling her to come and join him there. So she jumps on a boat and does. What awaits her was not what she expected...
Two women, the Dark sisters, convince Tessa that they're friends of her brother (Nate) and once they have her trapped, the story really begins. They force her to use a power she didn't even know she had: shape shifting. They make her use her gift until she is good at it. She still can't wrap her head around all this though and wants nothing more than to leave. Is her brother okay?
Then she finds out the Dark sisters are preparing her for a wedding, her wedding to someone they call the Magister. She doesn't want to marry this guy and she doesn't have to when she is saved by Shadowhunters and not just any shadowhunters but Will Herondale. Yes, every one loves him to pieces by now. Though I've only read this book and so far I like Jem better. Please don't hate me for saying that.
Tessa learns of the shadow world and everything to do with it. She finds out that she has a bigger part in this world than she ever thought. She is the key to it all pretty much. She learns she is a special warlock and doesn't take it so well. She wants nothing more than to be normal.
After lots of heartbreak and betrayals, they finally solve the problem but not without loss of life on the shadowhunter side. Also, the big bad of this series gets away at the end to set up for the other two books.
I really enjoyed this book it's a wild ride of ups and downs, happiness and scenes that rip your heart out. As usual, I love Cassandra Clare's writing and characters. She really makes the characters feel so real. Will I can see why everyone loves him so much he is pretty awesome, but he can be a huge jerk sometimes. So as of this book, I like Jem better. He is such a sweetheart and so kind. I feel for him, and wish I could make him better. It's not right he should suffer.
Overall, I really loved this book. It's so good. If you haven't read it yet, you should, ASAP! I can't wait to finish the rest of this series. I even dreamed about it one night haha.
By now I'm sure you guys know about my Instagram deal. If not, just click the link to check out what music I was listening to while reading this awesome novel.

Favorite Quotes
1) “One must always be careful of books," said Tessa, "and what is inside them, for words have the power to change us.”
2) “Remember when you tried to convince me to feed a poultry pie to the mallards in the park to see if you could breed a race of cannibal ducks?"
"They ate it too," Will reminisced. "Bloodthirsty little beasts. Never trust a duck.”
3) “You know," Gabriel said, "there was a time I thought we could be friends, Will."
"There was a time I thought I was a ferret," Will said, "but that turned out to be the opium haze. Did you know it had that effect? Because I didn't.”
4) “Are you implying that shreds of my reputation remain intact?" Will demanded with mock horror. "Clearly I have been doing something wrong. Or not something wrong, as the case may be."
He banged on the side of the carriage. "Thomas! We must away at once to the nearest brothel. I seek scandal and low companionship.”