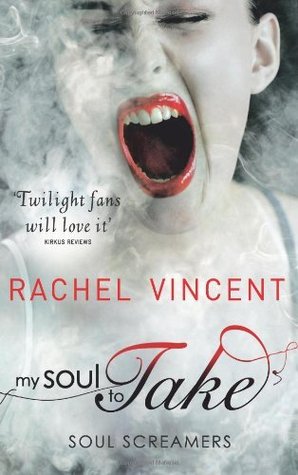 Something is wrong with Kaylee Cavanaugh...

She can sense when someone near her is about to die. And when that happens, a force beyond her control compels her to scream bloody murder. Literally.

Kaylee just wants to enjoy having caught the attention of the hottest boy in school. But a normal date is hard to come by when Nash seems to know more about the dark forces behind Kaylee's power than she does.

And when classmates start dropping dead for no apparent reason and only Kaylee knows who'll be next, she realizes that finding a boyfriend is the least of her worries!

Book Breakdown
Kaylee has been lied to her whole life. Her family made her out to believe she was going crazy. Even going as far as sending her to the hospital. Why? Once in the mall, she saw something in the mall and screamed bloody murder.
But there is something going on, a huge secret Kaylee doesn't know but through strange events and a hot guy from school, she learns not only that she's a bean sidhe. Nash is one also, so he decides to tell her about herself after three teenage girls fall over dead.
After finding out the truth, she decides to dig deeper, questioning why three healthy girls would just drop dead. She soon learns the sad truth and with the help of a few reapers and her father, it all will come to an end. Her life will ever never be the same again, is she ready for that? What will she do when it's her best friend's life on the line? Will she stay out of it or risk it all for her friend?
Okay, so this book is amazing! It's one of my new favorites! The feels I got reading this! I also love Kaylee, she's not scared to what she thinks is best, even if it may get her into trouble. She will even stand up on her own if no one else will join her.
I also love Tod! He's funny, sneaky, adorable and I just could swoon for him!  He's better than Nash, though I do like Nash too, just not as much as Tod. I love all the characters really, I think they are well developed and I'm sure as the series continues it will they will develop even more.
The ending had me crying though, I didn't see the twist coming and it really hit me hard. What I love most is how different it is. I mean yes, it's girl is special and doesn't know but ends up being super powerful. But it's not vampires or werewolves, it's about a bean sidhe! How cool is that?!
So lastly, if you're not read this series yet, you should! It's fantastic! You'll love it!

Favorite Quotes
1) “Did he show himself?” Nash asked, and I glanced to my right to see him staring at my father, as fascinated as I was.
My dad nodded. “He was an arrogant little demon.”
“So what happened?” I asked.
“I punched him.”
For a moment, we stared at him in silence. “You punched the reaper?” I asked, and my hand fell from the strainer onto the edge of the sink.
“Yeah.” He chuckled at the memory, and his grin brought out one of my own. I couldn’t remember the last time I’d seen my father smile. “Broke his nose.”
2) “So what does Tod look like? Whitewashed skeleton skulking around in a black cape and hood? Carrying a scythe? 'Cause I'm thinking that would cause mass panic in the hospital." ..... "Do you chase after a funeral processions in a long, dirty dress, hair trailing behind you in the wind? I shot him a mock frown. "Have you been following me again?”
3) “...the dead have a way of becoming saints in the eyes of their survivors...”