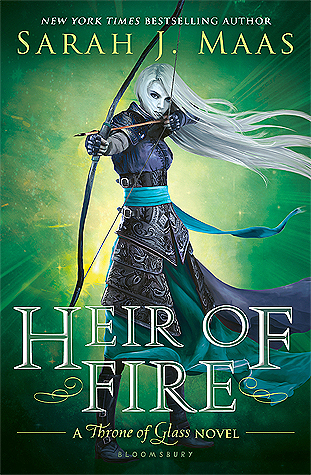 Celaena has survived deadly contests and shattering heartbreak―but at an unspeakable cost. Now, she must travel to a new land to confront her darkest truth . . . a truth about her heritage that could change her life―and her future―forever. Meanwhile, brutal and monstrous forces are gathering on the horizon, intent on enslaving her world. Will Celaena find the strength to not only fight her inner demons, but to take on the evil that is about to be unleashed?

The bestselling series that has captured readers all over the world reaches new heights in this sequel to the New York Times best-selling Crown of Midnight. Packed with heart-pounding action, fierce new characters, and swoon-worthy romance, this third book will enthrall readers from start to finish.

Sorry, I just had to get that out. My inner fangirl had to have her moment. Forgive me if she gets out again, she's sometimes hard to contain in moments such as these.
So this book is even better than Crown of Midnight and I never thought that would happen. These books really do keep getting better and better! Also Rowen! He's so awesome! Chaol... I know so many people shipped him and Celaena but I never did so I'm glad it looks like that ship has sunk. I'm sorry if that's your ship though. I used to want her with Dorian but I don't think that will happen either. So yeah...
What I love most about Sarah's writing is how she brings out such strong emotions in me. I cried, screamed and laughed so much during this book. I don't always do that with other books. She makes her characters so real. Like Celaena, she is flawed but pushes through those flaws and becomes such a better person. I'm so proud of her! Finally forgiving herself and moving forward. I can't wait to see what she does next!
I love watching Manon grow, she was so hard at first but we slowly get to see her heart come through, Dorian finally stood up to his evil ass father! Chaol finally chose a damn side!
I also found myself really falling in love with Aedion Ashryver! I can't wait to see those two together again, I think they will make one hell of a team. He's so kickass. He will help our girl so much, if she can get him free...
Also have I said how much I adore Rowen?! He is so swoon worthy. I have been told that she and Rowen get together? I wonder how that will work for him she dies? I don't know much about that yet as I'm just starting Queen of Shadows so yeah... just my thoughts.

I also just want to add that while this book is huge that it reads so quickly. Once I actually sat down to start reading it, it only took a few days to finish. So don't be scared to jump in and go for it! I don't often give five star ratings but this one fucking earned it! Amazing from the first to the last page. Sarah J Maas as done it again!

Favorite Quotes
1) “She was the heir of ash and fire, and she would bow to no one.”
2) “I claim you, Rowan Whitethorn. I don't care what you say and how much you protest. I claim you as my friend.”
3) “Their hands clasped between them, he whispered into her ear, "I claim you, too, Aelin Galathynius.”
4) “Gods, he was brilliant. Cunning and wicked and brilliant. Even when he beat the hell out of her. Every. Damn. Day.”