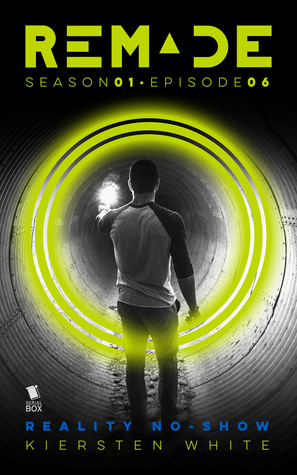 You live. You love. You die. Now RUN. ReMade.
Every minute, 108 people die.
On October 14th, 2016, from 9:31-9:32 p.m. EDT, 23 of those deaths will be teenagers.
Now they are humanity’s last hope for survival.
Awakened in a post-apocalyptic world and hunted by mechanical horrors, these teens search for answers amidst the ruins of civilization. Fate, love, and loyalty face off in this adrenaline -pumping YA adventure.
ReMade will unfold across 15 episodes. "Reality No-Show" is the sixth episode.
Teddy, a teenage heart-throb and reality TV star, is used to being followed by cameras and waking up in strange beds with strange girls. But robot cameras with no operators, beds made of plastic, and girls that have no desire to be in bed with him? That he very unused to. Suddenly trapped in a weird alt-version of his own life – with a rare girl who wouldn’t even have wanted a part in his old one – the teen star seeks questions, and a way out.
This episode written by Kiersten White.
Serial Breakdown
Teddy Young is a young football reality show star. His whole life is fake... planned out for him. That doesn't really bother him though as he believes he's going to go crazy by 19. Just like his father and grandfather. He just hopes when he goes, he didn't hurt his mum like his father did. After something goes badly at party and he tumbles over a fence and dies.
He wakes up on what looks like a set of his life. His school, house, the places he ate at, and even the train station where his 'girlfriend' broke up with him. He thinks he's finally gone crazy. Even thinks the creepy robot following him with red eyes is his mind's way of making the crazy seem normal.
Though when he wakes up next to a girl that changes. She is a Latina just like his ex 'girlfriend'. The robots want them to create all the scenes from his show and they didn't get his ex but a girl that could replace her. Inez, she is awesome! I think she might be one of my favorite characters yet. No, she is one of my favorite characters.
They pretend to act out some scenes until they get out of there. Inez ends up blowing up the whole place. Which I loved! She is just too awesome. So they get on the train and get out of the creepy set, only to end up at the place where our other teenagers were running too.
I can't wait to see what happens next, they are finally moving, finally doing something! I just hate that it took some character death for that to happen. Teddy and Inez are some of the best characters yet. This was also a funny episode.... which is sad very as nothing is funny about this series. Teddy is just a funny guy where he thought he was crazy, he took nothing seriously. It was nice to get some little lightheartedness in this dark serial.
This ARC was given to me by NetGalley for an honest review.