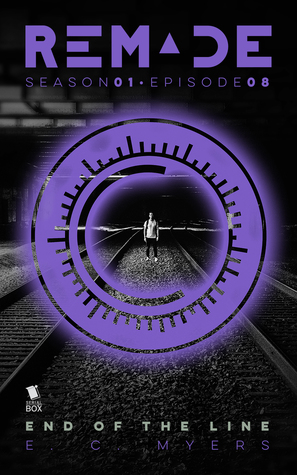 You live. You love. You Die. Now RUN. ReMade is a thrilling sci-fi adventure that will take readers past the boundaries of time, space, and even death.

This is the 8th episode of ReMade, a 15-episode serial from Serial Box Publishing. This episode was written by E.C. Myers.

After a twitchy trigger finger leaves the train without a driver, the group scrambles to find a way off their runaway getaway. With food running out and still no idea where they are headed, it’s hard to imagine things could get worse…

ReMade Season One: In one moment the lives of twenty-three teenagers are forever changed, and it’s not just because they all happen to die. “ReMade” in a world they barely recognize – one with robots, space elevators, and unchecked jungle – they must work together to survive. They came from different places, backgrounds, and families, and now they might be the last people on earth. Lost meets The Maze Runner in exciting serial adventure.


Episode Breakdown
I want to start by saying that this group needs a real leader, it can't keep going this way. The leader can not just be whoever we follow this episode. It's making it hard to follow and it tends to put down characters who were just raised up in the last one.
They finally get off the train.... after it catches on fire and Inex pulls a pretty messed up stunt. She really seems like the type that thinks her shit doesn't stink. I didn't mind her though till the beach scene in the flashback... how she was getting pissed that men thought she was good looking or her comment about doing herself. Yeah...
I'd have liked her so much more had she not done that... this serial seems to be going downhill now and that makes me sad, I liked it a lot before and now... I'll give it a few more episodes and see what I think. Hopefully it gets better.