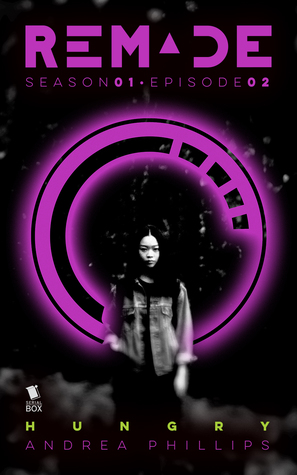 You live. You love. You die. Now RUN. ReMade.
Every minute, 108 people die.
On October 14th, 2016, from 9:31-9:32 p.m. EDT, 23 of those deaths will be teenagers.
Now they are humanity’s last hope for survival.
Awakened in a post-apocalyptic world and hunted by mechanical horrors, these teens search for answers amidst the ruins of civilization. Fate, love, and loyalty face off in this adrenaline -pumping YA adventure.
ReMade will unfold across 15 episodes. "Hungry" is the second episode.
May likes being in control: with an obsessive drive to succeed and her aim set on Harvard, she knows how to keep her life on course. Plucked from her whirlwind of tests and achievement charts, and dropped into a world where civilization itself has crumbled, she wants more than just answers. But living with deadly allergies means you’re always on the razor edge – one peanut, one bee sting, one toe out of line could be your downfall, and nobody wants to die twice.
This episode written by Andrea Phillips.
Episode Breakdown
First off I want to thank NetGalley for giving me this title for review.
So in this episode we follow May, who does not take any crap from anyone! While I admire that, it can make her come off as a bit of a bitch. May is the over-achiever, the one that had her whole life planned out, she was going to be on the Supreme Court as the first ever Chinese American.
She made the best grades, joined the right after school activities, she was no going to settle for anything less than her dream and for that I have to give the girl props. She pushed herself so hard to the limit just to make her dream come true, all that changed when she died.
May has severe food allergies and she took a chance on something she shouldn't have. Now she's stuck with other teenagers who've died in the middle of the jungle. No one knows why they're here  and some don't even care, sadly.
We do get to learn that whatever illnesses they had before are healed. Scars, and even some tattoos are healed and gone. No one is sick anymore and May's allergies seem to have vanished as well. What did those caretakers do to them?
They did break down the elevator down so none of those creepy things could follow them down, or it looks that way. In the end, I'm honestly just left with more questions than answers and I will admit, I'm hooked to this serial. I can't wait to keep it going.
It feels a lot like The 100 to me, which is a really cool as I love The 100. Teenagers all stuck together trying to live in the jungle. I think if you like the show then you'll like this too. There is also some great diversity. Which I'm so glad to see! Honestly, I was nervous after the first one but this just looks too good, it's got me hooked!