This meme is hosted by myself and the lovely Laura from Blue Eye Books.
What is 50/50 Friday?
Everyone has a favorite and then we also have something we dislike. Like a coin, there are two sides to every question. Example: best sequel you've read/worst sequel you've read.
Topic of the Week
A Character Most and Least Like Yourself. 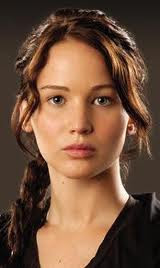 So this one has been rather tough. But I think the character I'm most like Katniss. Just a girl who wanted to save her sister but was thrown into major shit that she didn't even want. People uses her for their own gain and all the while she just wants those she loves safe and sound. She's been through a lot and while it's changed her, she never gave up.
That's me, I would have done the same for my sister. I would want nothing more than safety for my family and those I love. I try and do what's right even if it hurts me in the long run. I also will never give up, I've been through a lot of my health and I almost died twice in my short life but for some reason I keep fighting to live. I'm a fighter just like Katniss.
The Character least like me would have to be Anna from Anna and the French Kiss. She's so sad and upset about going to a boarding school in France and I would have been so damn excited! I would have had everything packed in one night and ready to get a flight the next morning.

I also would never been as mean as she was that first little bit. She was so bitter just because she had to be there and that wasn't fair to anyone trying to be nice to her. I also would never be the girl to kiss a guy who's got a girlfriend, no matter how much I like him, no matter how messed up the relationship between them is. I hate cheating in any form. That also means that had he kissed me while dating another girl, I would never have dated him when/if they broke up.
So these are my answers for the week. What's yours? Link up below or just comment. I'd love to see your thoughts! Join us next week and have a great weekend! Happy reading!
Next Week's Topic
Most/Least Favorite Cover