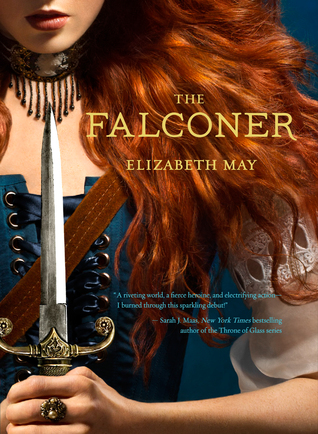 One girl's nightmare is this girl's faery tale

She's a stunner.
Edinburgh, 1844. Eighteen-year-old Lady Aileana Kameron, the only daughter of the Marquess of Douglas, has everything a girl could dream of: brains, charm, wealth, a title—and drop-dead beauty.

She's a liar.
But Aileana only looks the part of an aristocratic young lady. she's leading a double life: She has a rare ability to sense the sìthíchean—the faery race obsessed with slaughtering humans—and, with the aid of a mysterious mentor, has spent the year since her mother died learning how to kill them.

She's a murderer.
Now Aileana is dedicated to slaying the fae before they take innocent lives. With her knack for inventing ingenious tools and weapons—from flying machines to detonators to lightning pistols—ruthless Aileana has one goal: Destroy the faery who destroyed her mother.

She's a Falconer.
The last in a line of female warriors born with a gift for hunting and killing the fae, Aileana is the sole hope of preventing a powerful faery population from massacring all of humanity. Suddenly, her quest is a lot more complicated. She still longs to avenge her mother's murder—but she'll have to save the world first.

The first volume of a trilogy from an exciting new voice in young adult fantasy, this electrifying thriller combines romance and action, steampunk technology and Scottish lore in a deliciously addictive read.

Book Breakdown
We follow 18 year old Aileana on a hard mission. She's the last of the Falconers, which means she is the only one who can stop the really powerful faeries from escaping from their prison and taking over Edinburgh. She's also the only daughter of the Marquess of Douglas. So she also needs to act like a real proper lady while not getting caught hunting the faeries. Did I mention she saw her mother murdered in front of her by a faerie?
Yeah, she doesn't have an easy life at all. I don't envy her. She hunts the fay every night and it's taking a toll on her life as a lady. Leaving the ball when she should be dancing and coming back with torn clothes and wounds. She's also crushing on a powerful faerie, one that has helped train her.
This is an amazing book! I enjoyed it so much! It was easy to get into and the plot is fast paced. Full of action and steampunk goodness. Aileana is an awesome character. I love how strong she is but she seems so real because she does have her weaknesses. I've got nothing to say about this book other than the fact that the ending was such a cliffhanger. I need the next book now! I can not wait for Amazon to ship me the next book!
Read this book now! It's so great and it's sad that it doesn't have the hype it so rightly deserves. Please show this book some love and read it! You will love it as much as I do!
*This book was given to me by NetGalley for an honest review*