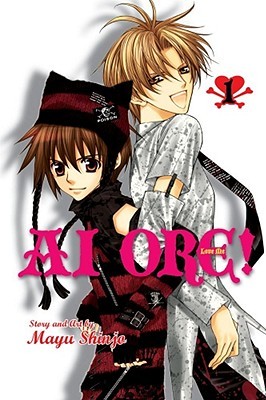 Mizuki is the female “prince” of her all-girls school and the lead guitarist in an all-girl rock band. Akira is the male “princess” of his all-boys school and wants to join her band. Love may be on his mind, but romance is difficult when everyone keeps mistaking Mizuki for a boy and Akira for a girl!
When the lead singer of Blaue Rosen announces she is moving overseas, Akira does all he can to convince Mizuki and her bandmates to let him join. But will a resistant Mizuki allow him into her band, much less her heart?
Manga Breakdown
So it took me a while until I got into this manga. It was so hard for me to get straight who was who. My mind kept telling me that the guy was the girl and the girl was the guy. Once I got the hang of who was who. I really enjoyed this manga.

I like that it's different from any other manga I've read and it's so much bigger than any manga I've seen, which was a plus for me. I have been cutting back on buying manga because I read them so fast that I feel they are too expensive for me right now so I really felt I got my money's worth out of this.

I will say Dark Akira creeped me out at times. There was times I could not even look at the drawings and my partner was laughing at me.

This manga is fun, about a girl who is the 'prince' of her all girl's school and then we have a boy who is the 'princess' of his all boy's school. They like each other but manga is never that simple and so shit happens. Many times over.

I like watching their struggle though all these things but there is one thing I think they took too far. The rape at the end of the manga. I don't know if the girl is actually going to be raped and I understand why Akira would want the girl raped for almost raping his girl but still. If you fight fire with fire... you get a bigger fire.

If you can look past that and just enjoy the manga for what it is. I will keep reading this series because I picked the whole thing up for $5 at Half Price Books and I didn't hate it. It's not the best manga and it's probably not for everyone but I actually liked it.