This show... I've been trying to think of what to say. To put my feelings into words but it's so hard. I can say this is amazing. It made me smile and sob big ugly tears a lot. It ripped my heart out and then at times gave me some small hope.

This series is based off the book that was published in 2007 by Jay Asher. I want to say that I have never read the book and I don't know if I ever will. The show hit me so hard.... books always hit me harder then TV or movies so I don't think I could take reading the book without becoming a huge mess and laying around for days on the sofa crying my eyes out.

Hannah Baker. A beautiful girl whose life was ruined by bullies. It all started with s simple picture... and it got increasingly awful from there. She makes these tapes before she kills herself and asks that they be left for every person who helped in her choice to end her life.

Which is where Clay comes in, he's the one we follow the most in this series and we get to see him go through so much listening to these tapes. Learning everything from Hannah. All the other people that were in involved.

This show is very dark with very few happy moments but those happy moments... they are glorious and I found myself never wanting to let go of them. I couldn't stop watching as everything went from bad to worse each episode. The ones that helped Hannah in her choice aren't fairing well. They are all suffering in their own way.

What I love most about this show is it doesn't shy away form the brutal things that happened. It shows just how awful it is. There is rape in this show and it doesn't shy away from how truly awful it is. What it's like for those victims. It's so.... I just sobbed watching Hannah... then when they showed her final moments... I lost it. I had to stop watching and try to contain myself before I could press play again. It's so sad that these things happen.

I think the message is good in this show though: don't be a bully. Try and be a good person. Don't judge people because they may look like they have everything together, but God you have no idea what they are truly going though. Even if we do something as little as telling someone to shut up or publishing their poem. You don't know if that could be the thing to push the person over the edge.

I don't agree with those people that think these teens shouldn't be blamed. They should at least partly. Bullying is not something to be taken lightly. I do feel so bad for Clay though because he didn't have a huge part in her death, he says he shouldn't have been scared to love Hannah but he showed her at the party how he felt. She pushed him away. What was he to think? Where she wouldn't open up to him... 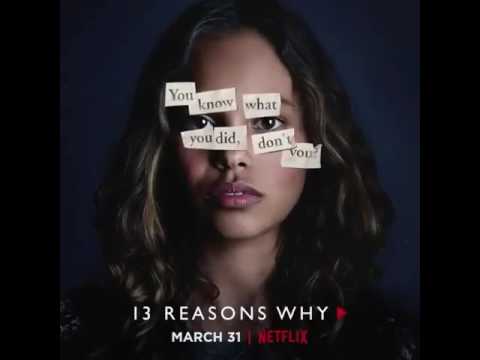 I get it, by this point she was so lost and numb, so alone... but I also can't help but blame Hannah too for not opening up to her Clay or maybe trying her parents. I get that she felt like a failure to them and she did try getting help from the school and that was a huge bust but some of the blame lies with her too.

That's something else that I love about this show, there really is no black and white. All of these characters are shades of grey and I found myself hoping they got help and then part of me wanted them to get what they deserved. Like Justin, I hated him in the beginning. What an ass but then we see his backstory and while that doesn't excuse his actions... it starts to make sense. That's what I loved most about this show, it was always giving me something else. Something to think about. Something to really push my mind and make me wonder.

In the end, I feel like... I don't know. It makes me feel empty and there are so many unanswered questions and then I'm left wondering about Alex and if everyone was so busy focusing on themselves that again they missed all the signs and let him slip through the cracks just like they let Hannah.

This is a great show but it's dark and there isn't a lot of happiness. So I know this show won't be for everyone but I think it's needed. It shows the effects of bullying and just how it can really hurt someone.

Also if you or anyone you know is thinking that suicide is the only way out, please call this number. You matter. Your life matters. Don't ever give up, once you hit the bottom, there is nowhere to go but up.
1-800-273-8255