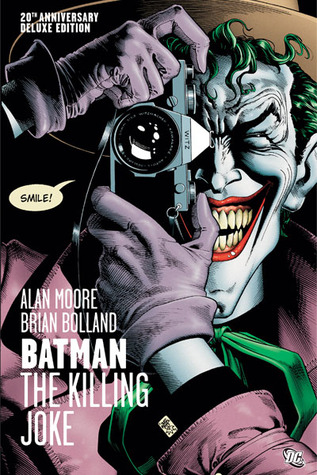 For the first time the Joker's origin is revealed in this tale of insanity and human perseverance. Looking to prove that any man can be pushed past his breaking point and go mad, the Joker attempts to drive Commissioner Gordon insane.
After shooting and permanently paralyzing his daughter Barbara (a.k.a. Batgirl), the Joker kidnaps the commissioner and attacks his mind in hopes of breaking the man.
But refusing to give up, Gordon maintains his sanity with the help of Batman in an effort to beset the madman.
Breakdown
This is my first time ever reading a graphic novel and I am impressed. I will admit I was one of those people who thought these things of things were for little kids. How freaking wrong I was! I should have known better as I read manga and it's not that way. I mean they make some for kids but some are not kid friendly.... okay I'm getting off topic.
I finally decided to try a comic/graphic novel because it's all over my Twitter feed, also my partner has been trying to get me to read some since probably the first day we got together. I caved, I was in a reading slump and I thought the Killing Joke would be a great thing to help me out of it. It's another reason I read manga, they offer the same thing to me.
So I started this story... it's dark, gritty, violent, and it even has some nudity. So everything I thought about comics were blown out the window in the best way possible. I loved the moral dilemma that Batman is facing in this one. Should he finally kill the Joker? If he doesn't, will the Joker finally kill him?
The Joker is so perfectly insane. He's so broken and it shows, even though he's the bad guy and does terrible things in this one, the flashbacks make you feel badly for him. Alan Moore did a great job writing this! It's one of the best written stories I've ever read. It all ties in so wonderfully. I love how he doesn't look down his nose at the material he's given. He's treats these characters as mature and something worth while, he doesn't treat them like something geared towards kids.
The art style is flawless, I'm one of those people if I don't like the art style it takes away half the enjoyment of reading or I won't even read it to begin with. Here that's not a problem. Brian Bolland is one talented guy! I wish I had half his talent.
Overall, this is amazing and I would recommend it to anyone who loves very dark Batman stories but it's definitely not for children.