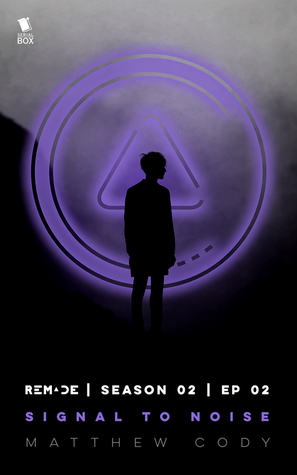 This is the 2nd episode in the second season of ReMade, a 14-episode serial from Serial Box Publishing. This episode was written by Matt Cody.
You live. You love. You die. Now RUN.
Upon arriving at Sanctuary, the group is faced with two clearly malicious and dangerous caretakers. But they’ve come this far, and are determined to get inside. The only thing to do is stand and fight—whatever that may take.
One moment proved fateful for a group of teenagers—and not just because it’s the moment they all happened to die. At the moment of their deaths, they were snatched forward into the future and remade in a world they hardly recognize. Now, after facing murderous robots and an unpredictable environment, the teens have begun to find their footing. But can they survive long enough to figure out why they were remade? And will they ever be able to stop running?
Episode Breakdown
*Thanks to NetGalley for this ARC in exchange for an honest review*
This time we follow Holden, one of my favorite characters in this whole serial but damn... he keeps going on like he and Seyah were married and she filed for divorce, thus ruining years of wonderful love between them. She never returned his feelings! Nothing ever happened between them! GET OVER IT DUDE!!!! There are much better girls out there... like Nevaeh. She's so kind and sweet.
Anyway, Holden's group is in search of Sanctuary but he's starting to question himself and can't get his mind off HER. The one that he loves so much that it's rather creepy. Just saying. Dude is too good for her.
They do end up working together and find something they believe might be Sanctuary and this episode ends with the door to the place opening up after they get rid of two Caretakers. As always we are left with more questions then answers and it's driving me insane! I want to know everything now. Hopefully we get a few more answers in the next one.