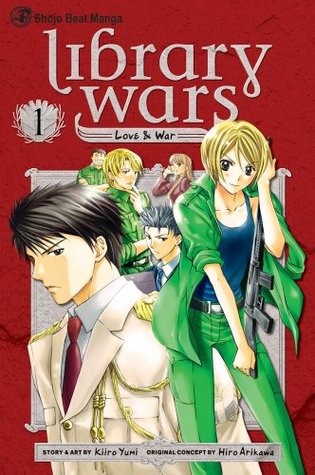 In the near future, the federal government creates a committee to rid society of books it deems unsuitable. The libraries vow to protect their collections, and with the help of local governments, form a military group to defend themselves--the Library Forces!
Iku Kasahara has dreamed of joining the Library Defense Force ever since one of its soldiers stepped in to protect her favorite book from being confiscated in a bookstore when she was younger. But now that she's finally a recruit, she's finding her dream job to be a bit of a nightmare. Especially since her hard-hearted drill instructor seems to have it in for her!
Review
Love this! The storyline feels so relevant to today. The government censoring books for 'problematic' things. It's kinda like a nightmare of what could come if certain people got their way. If this ever were to happen Id be the first to sign up for the Library Forces. Now, let's actually talk about the manga shall we?
Iku has dreamed of joining the Library Forces ever since she was saved by her 'prince' when she was trying to get a fairy tale book that she had waited a decade for. The government has come to a bookstore to take all the books that it has deemed hurtful and our girl Iku, well... she happens to have one of those harmful books. She tries to keep it but is found out and low and behold, she's saved by some guy. She doesn't remember his face and never got his name.
Still, she joins the Library Forces because of him. Not only does she want to meet him, she wants to be just like him, saving books. She works her butt off and isn't too bad at her job. Though when she gets chosen to join the special forces... she runs into problems but Dojo... her instructor... who used to be mean to her is slowly coming around... is he the one that saved her all those years ago?
So the plot is epic but it's based off a novel...? I need to look more into that. The art is mostly great, there are a few panels where it's not up to par but it's mostly really good and I'm sure it will get better as the series goes along.