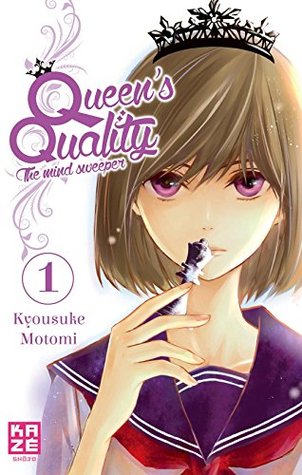 The adventures of mind Sweepers continue in this supernatural romance!
Fumi Nishioka lives with Kyutaro Horikita and his family of Sweepers, people who specialize in cleaning the minds of those overcome by negative energy and harmful spirits. Fumi has always displayed mysterious abilities, but will those powers be used for evil when she begins to truly awake as a Queen?
Fumi has never shown much romantic interest in Kyutaro, the quiet but formidable Sweeper who may be the only one who can keep Fumi's power under control. But when Kyutaro tells her that he'll never leave his side, she unexpectedly starts to fall for him!
Manga Breakdown
Quote: “Anyone whose first thought is to rely on someone else . . . isn't capable of moving forward.”
I have been reading so many manga this month. I am in one of my manga moods. So there will be lots of manga reviews to come. So buckle in and let's jump into this manga.
This series is a continuation of the manga QQ Sweeper. I really don't know why the mangaka decided to do that, other then the fact that this series we follow Fumi more and in the other we got to peek into Q's head.
Anyway, this picks up pretty much where the other left off, she's still a cleaner, still living with the same awesome people. Fumi finally is told about the Queen thing. Making her fear the evil queen will take over. Q is also told that he can never tell Fumi that she was the little girl he'd fallen in love with but he must stay by her side. I feel so bad for him, that's gotta suck.
Now the art is freaking stunning and I know that lot's of people will say this is kinda like that other series this author did... you'd be right, there are lots of similar things in this series and Dengeki Daisy, so if you're a fan of that series, you'll love this one as well. I know I am loving it.