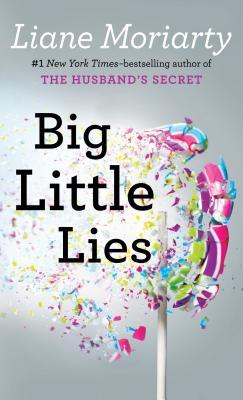 Madeline is a force to be reckoned with. She’s funny and biting, passionate, she remembers everything and forgives no one. Her ex-husband and his yogi new wife have moved into her beloved beachside community, and their daughter is in the same kindergarten class as Madeline’s youngest (how is this possible?). And to top it all off, Madeline’s teenage daughter seems to be choosing Madeline’s ex-husband over her.
Celeste is the kind of beautiful woman who makes the world stop and stare. While she may seem a bit flustered at times, who wouldn’t be, with those rambunctious twin boys? Now that the boys are starting school, Celeste and her husband look set to become the king and queen of the school parent body. But royalty often comes at a price, and Celeste is grappling with how much more she is willing to pay.
New to town, single mom Jane is so young that another mother mistakes her for the nanny. Jane is sad beyond her years and harbors secret doubts about her son. But why? While Madeline and Celeste soon take Jane under their wing, none of them realizes how the arrival of Jane and her inscrutable little boy will affect them all.
Big Little Lies is a brilliant take on ex-husbands and second wives, mothers and daughters, schoolyard scandal, and the dangerous little lies we tell ourselves just to survive.
Book Breakdown
So I didn't know this book was even a thing till I saw the HBO show. I heard such great things about it and so I gave in and watched the show and I fell in love. I never would've thought that a show about mother's and their children would be something I would love but it was. So After I watched and loved the show, I had to read the book and as always, the book was so much better!
The ending was the main thing I found better in the book because it shows just how each person dealt with it and the person who did it actually confessed and it explains why this person killed them. It made such sense while in the show I did wonder why this person would kill, even if they didn't mean to. I love that some of the men were involved, it seems to me that the show took a more 'feminist' approach which is fine and dandy if that's what you're looking for but I liked that the husbands were there as it felt more... real? If that makes sense. I don't really know what word I'm looking for here but I just like the ending to the book better. But that usually happens, the book is always better.
The character development is top notch and I fell so in love with all of these characters and their world by the beach and it made me feel like I was there, at the beach and... I don't know what else I can say other than this book is fantastic. I don't give five stars often so when I do, it MEANS something, this book is worth all the stars in the world.
It made me cry, I felt such strong emotions with this story. I've not been moved by a book this much since ACOWAR last year. I also don't usually connect this much to a contemporary... actually, I never have with a contemporary but this book is just something special. I just love it. It's well written and wonderful and just pulls you into these women's lives.
Give it a read, you won't regret it. Not one bit.

My Favorite Quotes
1) “They say it's good to let your grudges go, but I don't know, I'm quite fond of my grudge. I tend it like a little pet.”
2) “Reading a novel was like returning to a once-beloved holiday destination.”
3) “Nothing and nobody could aggravate you the way your child could aggravate you.”