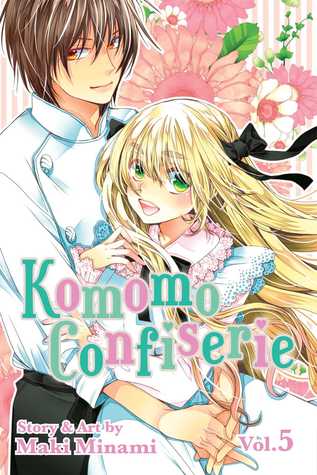 As a little girl, Komomo Ninomiya delighted in picking on Natsu Azumi, the son of her family's pastry chef. Ten years later, when the family fortune is lost and she has no place to live, Komomo encounters Natsu again in her hour of need. Now that Natsu is a master pastry chef in his own right, he'll help Komomo-but only if she works for him at his new confiserie!
Both Komomo and Natsu are resolute in their stance that they are not in love with each other, even though everyone else around them thinks otherwise. Now that Komomo’s fortunes and arranged fiancé have returned, a romance between a pâtissier and a princess seems even less likely. But Komomo is determined to pursue her own path in life when she realizes what she wants most.
Review
*Spoilers*
You've Been Warned!
This volume is the climax of the series. The final volume and it's such a let down... I mean they didn't even kiss! I waited this whole time, through all this build up and no kiss! None. I can't even. I know I probably sound silly to you but in my mind it would've made sense for them to at least kiss. Maybe when he's had her in his arms before the dad came into the scene... just a little kiss. Let me get into plot for this volume a little bit...
So it turns out that Komomo is the arranged marriage for Mitsuru and he wants to know why. That's when he talks to Natsu and finds out that Komomo is a true princess and her father just lost all their money but is close to getting everything back. Natsu STILL refuses to say that he loves Komomo at this point. When the time comes, he lets her be taken back to her old house. Willing to let her go... just like that. It made me want to slap his face.
Now they do end up together (duh) but it felt so rushed and just.... not satisfying at all. I was really let down. I'd been waiting since volume one and that was how the author decided to end it? Just made me sad. The series is still fun and do I recommend it as everyone's taste is different and you may like the ending. So give it a go. Can't hurt anything.