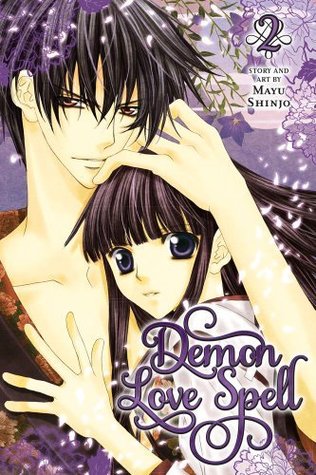 Miko is a shrine maiden who has never had much success at seeing or banishing spirits. Then she meets Kagura, a sexy demon who feeds off women’s feelings of passion and love. Kagura’s insatiable appetite has left many girls at school brokenhearted, so Miko casts a spell to seal his powers. Surprisingly the spell works—sort of—but now Kagura is after her!
Manga Breakdown
Damn.... it really went there. The poor Fox... that was heartbreaking. I did not see that coming and it really ripped my heat out and set it on fire. Besides that ending with the Fox plot, this volume is much like the first one was. I felt so bad for the little one eyed demon... he only wanted to help his sister! I'm glad that it did work out in the end and I wish that Miko would just be honest with Kagura instead of lying to him about everything. She finally told him she loved him only after being worried for him. She only decided to be with him once she thought he was dead. Like come on... either you love him and want to be with him or dump him and tell him to go to hell. Don't play with him.
That being said... I know some people will think I've lost my mind. They will probably say that he shouldn't be pushing her and that's true too. One should never push the one they love though I do get why he does it in this fictional world... it seems to be the only way she will admit her feelings for him. This series isn't perfect, far from it. That being said, I'm one of the few that can separate fiction from reality and I can just enjoy this series for what it is. A fun, raunchy manga that makes me laugh and helps me escape from real life.
The art is still wonderful as I've come to expect from this mangaka. I think she keeps getting better with each new volume she puts out. As always, it's always entertaining and fun. Plus, it's supernatural and I LIVE for anything paranormal.