Norman: The Doll That Needed to Be Locked Away - ARC Review 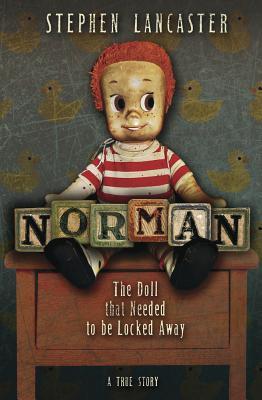 When paranormal investigator Stephen Lancaster brought home an old doll from an antique shop, he had no idea what bizarre and terrifying things were about to occur. From Day One, Norman the doll raised Hell. He caused sudden infestations of rats and spiders. He frightened dogs and put children in trances. He even moved on his own in video surveillance footage. And that was just the beginning.
Norman takes you on a thrilling journey into Stephen's life with a doll that has held the spirit of an unborn child for over fifty years. A haunted doll that still lives in Stephen's house, locked away in his own room to keep him from once again endangering the house and Stephen's family.
ARC Breakdown
First, I want to say that I received this ARC in exchange for an honest review from NetGalley. Now that's out of the way, let's just jump into this. I loved this book! It's creeped my out and hooked me so that I couldn't put it down even if I wanted to stop. It's well written, easy to understand and filled with more action than I thought.
This story follows Stephan and his family after they buy Norman and take him home. He causes all kinda of creepy things to happen. First it starts off rather innocently, a few laughs and he will move around, but it gets worse to where he tries to kill Stephan. They even try getting rid of the doll and nothing... he somehow makes it to where he has to stay with him. It's rather intriguing.
Norman is one twisted soul that is now stuck in a very old doll. I don't know what I would do if he was in my life. I mean, after trying to kill Stephan... scary stuff. Now, I do know that while the book was great, I did think the ending was... lacking.... I mean, why keep the doll around? To each their own and I wish this family luck, I really hope that they all find peace and the doll won't cause anymore trouble while locked away in his little room.