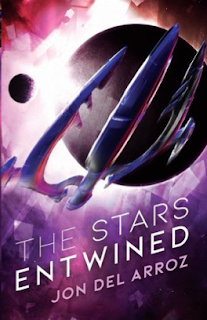 The Aryshan Empire and Earth are on the brink of war!
After several recent attacks along the boarder of Aryshan space, internal affairs agent Sean Barrows is brought to Palmer Station to ensure the Interplanetary Navy's on the right track in their terrorism investigations. Sean's work leads him to his most dangerous assessment yet - into the heart of Aryshan territory as a spy.
Meanwhile, Aryshan Commander Tamar is being groomed by the Ruling Committee to one day assure leadership of her people. First, she needs to prove herself in a warship command. As tensions increase with Earth, Tamar finds herself increasingly isolated as one of the few in opposition to the war. Her troubles deepen when she comes face to face with a new member of her crew, the most intriguing man she's ever encountered.
The Stars Entwined is the first installment in an epic space opera series by multiple award-nominated science fiction writer Jon Del Arroz. If you like Vatta's War by Elizabeth Moon or The Vorkosigan Saga by Lois McMaster Bujold, then you'll love this epic adventure with action, intrigue, and star-crossed romance filling every page.
Book Breakdown
This novel! I can't even with this novel! First, let's be up front, I am not usually into sci-fi. I mean, there's wrong with the genre but I lean more towards paranormal and fantasy. This novel though.... it's bloody perfect! Even through it's sci-fi, it's explained easily so a noob into the genre like me can easily catch onto all the space talk. There is romance too! I'm a sucker for romance and Sean is so adorable. I love the angle that was taken with his character, he's not the typical 'manly' man but he's still manly and whip snap smart, which is not something I've seen a lot of unless the character is like the nerd cliche. So this was very original and refreshing.
The writing is easy to follow with the perfect amount of description without feeling over or underdone. The characters all felt well flushed out and the romance felt real and solid, not over rushed awkward and forced. Tamar is strong and fierce without being a jerk and that was also refreshing. A lot of strong female characters being written down just annoy the crap out of me. They just aren't well done like they used to be.
Now, Tol is hilarious and I loved him. He's kinda crazy but in the best way possible, if that makes any sense... just read the book! You'll see what I mean.  He's freaking awesome. There is a sex scene in this novel... so it that bothers you, you've been warned. Personally, sex is a apart of life, and in books like this and romance books in general, sex makes sense being in the book. That being said, it's a very tasteful sex scene.
"The Aryshans shared a deep telepathic bond with their partners. Tol claimed each partner gifted part of their souls to the other."
This is such a wonderfully romantic and action packed novel. Even if you're like me and don't like Sci-Fi, pick this up, you won't regret it. I swear.
*I was provided a free copy in exchange for an honest review. This in no way reflects my opinion.