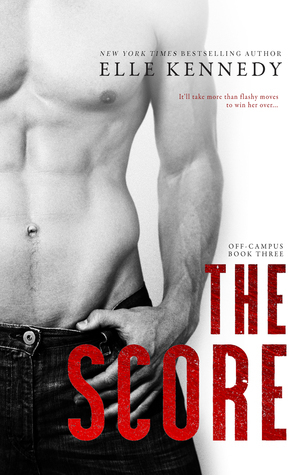 He knows how to score, on and off the ice

Allie Hayes is in crisis mode. With graduation looming, she still doesn’t have the first clue about what she's going to do after college. To make matters worse, she’s nursing a broken heart thanks to the end of her longtime relationship. Wild rebound sex is definitely not the solution to her problems, but gorgeous hockey star Dean Di Laurentis is impossible to resist. Just once, though, because even if her future is uncertain, it sure as heck won’t include the king of one-night stands.

It’ll take more than flashy moves to win her over

Dean always gets what he wants. Girls, grades, girls, recognition, girls…he’s a ladies man, all right, and he’s yet to meet a woman who’s immune to his charms. Until Allie. For one night, the feisty blonde rocked his entire world—and now she wants to be friends? Nope. It’s not over until he says it’s over. Dean is in full-on pursuit, but when life-rocking changes strike, he starts to wonder if maybe it’s time to stop focusing on scoring…and shoot for love.

Book Breakdown
The Score is so much better than The Mistake!!! I was worried this would follow down the line of the The Mistake but I'm so glad I was wrong. It's still not nearly as good as The Deal but I've come to terms that no one will ever be better than Garrett. No one.
So Allie just broke up with her long time boyfriend and needs to stay away from him so she stays the night at Dean's place after some drinking and drugs they decide to hit the sack together. Now all playboy Dean wants is Allie but Allie doesn't do casual sex but things happen and somehow they end up together but it doesn't last long when something tragic comes along and throws the happy train off its tracks. Will Allie and Dean make it through or will everything just fall apart?
Dean is a fine main lead but he's very boyish and had a pretty damn easy life. It makes him hard to relate to but Allie was pretty cool until the end where she just decides she needs to be alone for a little while, it really felt like drama for the sake of drama and I thought it was very unnecessary. Something else I dislike was the drugs. I hate reading about drugs and it can ruin a book for me in the blink of an eye. If you're like me be aware that Molly and pot are mentioned in this book, not a lot but in the beginning and real close to the end. Just a warning.
Besides those two complaints, I really did love this novel, it had me laughing my butt off more than anything, just too funny. It felt more like a rom-com than the other two in this series but not a bad direction to go in. Dean is a very modern type of guy, so if that's your thing, you'll love him to pieces.