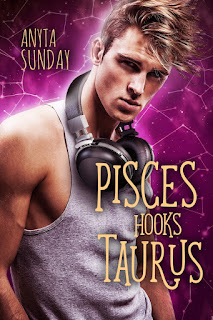 It’s a time for searching, and a time for finding, Pisces: keep casting your line and you will hook what you’re looking for.

Zane has it all planned out: land the perfect Meet Cute, fall in love, and live happily ever after.
Should be simple enough if he put his mind to it. A little creativity and some thinking outside of the box, and voila, he’d be married to the woman of his dreams.

It would be perfect.

And it would be before his visa ran out.


But why are his feelings running wild now that the pressure’s on? Why is his picture-perfect plan turning into a muddled mess of morphed metaphors he can’t make sense of anymore?

Just as well he’s met an English professor to help. And even though their first meet is anything but cute, this down-to-earth teacher may just be the realist Zane needs to ground him and give him a shot at love after all.

Don’t cast your line too wide, Pisces. Your perfect catch may already have bitten.

CAN BE READ AS A STANDALONE
Excerpt #1:
“Luke jumped to the boyfriend conclusion on his own. I would have corrected him, but he made such a fuss about not touching you in front of him. Said it would be weird.” Zane shrugged. “He wound me up the wrong way. I don’t want him telling me how I can be or not be around you. That’s our business, don’t you think?”
Beckett leaned against the doorjamb. “How we are together—whether we touch, kiss, sleep naked, have sex or not—that is most definitely our business.”
Zane swallowed, gaze lingering on Beckett’s cool pose. “That’s—” He cleared his throat. “That’s what I thought.”
Beckett pushed off the doorframe with the flat of his foot and Zane’s chest doubled in size.
Zane scored a hand through his hair. “Sometimes, I feel like . . . .”
“Like?” Beckett didn’t move away nor move forward. He stayed still, patient as always.
“I need a bath.”
Zane turned and fled into the house.
Flicking on the living room light was a mistake. Leah’s scarf, leggings, and lacy underwear were strewn over the furniture as though she’d gotten lucky and hadn’t bothered to clean up afterward.
Beckett stepped in behind him and cursed.
Zane had barely made it to the armchair when the sound of bedsprings groaning from the attic assaulted his ears. Jesus that was loud.
Like really freaking loud.
Zane hadn’t been the biggest fan of those squealing of bedsprings, but through the hollow ceiling it was worse. Echoed.
Had Beckett heard him twisting and turning in bed—had Beckett heard him jerking off?
He glanced to Beckett, who caught Zane’s panicked look, interpreted it, and calmly crossed the room toward him. Zane sidled behind the armchair as if it could protect him from the sheer mortification sweeping through him.
“Zane,” Beckett said in a low, quiet voice.
Zane scrubbed his heated face and peeked at Beckett through his fingers. “The other night, when I was, er, getting into that long-winded book—”
Beckett’s step faltered. “Oh, dear Lord—”
“You heard all that?”
Beckett slammed his eyes shut like, clearly not wanting to have this conversation.
Well, same here.
Slowly, Beckett reopened his eyes. “Yes, I heard you.”
Zane groaned and ducked behind the armchair. He wasn’t quite sure why he couldn’t laugh this one off. He would have with anyone else. Hell, he would have with Beckett a few days ago.
The armchair shifted and a chuckle floated from above him. Beckett teased the ends of Zane’s hair and Zane reluctantly looked up. Beckett was peeking at him over the back of the chair with an amused expression. “Why have you gone shy?”
“I don’t know.”
Beckett’s gaze flitted to his mouth and back to his eyes. “You know it’s okay to do it, right?”
“Yeah. It’s just . . . .” Something.
“Does it help to know I did it, too?”
“While . . . hearing me?”
“Will it be a problem if I say yes?”
Zane’s breath caught, and his cock grew heavy. “I really need a bath.”
“Not a cold shower?”
“I think you should take your sister’s underwear off the lampshade and busy yourself in bed.” At a small chuckle, Zane added, “With a book.”
About Anyta Sunday:
HEART-STOPPING SLOW BURN
A bit about me: I'm a big, BIG fan of slow-burn romances. I love to read and write stories with characters who slowly fall in love.
Some of my favorite tropes to read and write are: Enemies to Lovers, Friends to Lovers, Clueless Guys, Bisexual, Pansexual, Demisexual, Oblivious MCs, Everyone (Else) Can See It, Slow Burn, Love Has No Boundaries.
I write a variety of stories, Contemporary MM Romances with a good dollop of angst, Contemporary lighthearted MM Romances, and even a splash of fantasy.
My books have been translated into German, Italian, French, and Thai.
a Rafflecopter giveaway