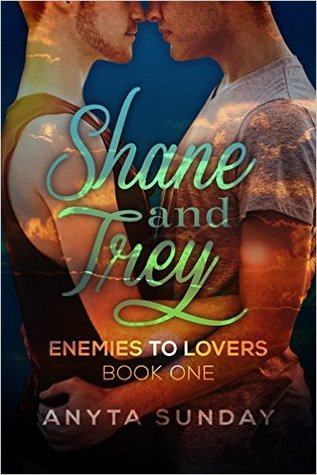 Get this book now on Amazon!


Shane is a little bit screwed, he's just started college and stuck rooming with that bastard Trey. His sister's boyfriend. His sister's damn fine boyfriend. Uh-oh. This so wasn't going to happen. But try as he might, there's just a little too much to ignore between the two of them...

Read what Anyta Sunday has to say about SHANE AND TREY:

Enemies to Lovers - who doesn't love this trope?!?

I really enjoy romances that pair guys that can't stand the sight of each other... but then, slowly, realize there's more to the other...

My "Enemies to Lovers" series is full of these stories, and right now you can grab the first book, Shane and Trey for FREE!

This classic Anyta Sunday new adult gay romance has over 70 Amazon reviews and over 2000 ratings on Goodreads.

Excerpt:
Near the end of the movie, Trey took another handful of chips. Actually, it might have been the rest. But he balanced them poorly and one fell onto the bed between my legs. In a movement so fast it may as well have blurred, Trey stuffed the chips in his mouth and shoved his hand down the tiny triangle of space in my lap. 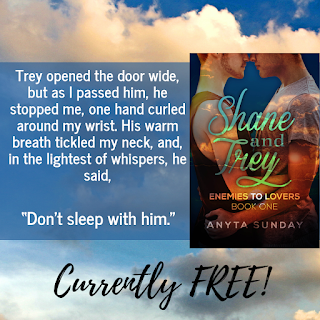 I sucked in a hard breath, holding it as Trey moved about trying to find his chip. I should have found it for him, or moved or something, but I’d frozen. There was only one muscle able to move now, and I was doing my best to avoid that happening. Trey was still glued to the screen, like he had no real idea what he was doing. Just a voice in his head whispering for him to find the chip. That delicious crunchy chip. Fucking chip!

Finally he found it and came out, managing to brush his hand over my inner-thigh as he did. Bastard. I scowled as he brought the chip to his mouth and began nibbling it. Nibbling it. Like, what was this guy doing to me?

Was it possible to wish for scary Trey back? The Trey that made me want to be best buddies with my dictionary. Because, in all honesty, I think that might have been easier to handle.

As the credits rolled up, Trey rested a hand on my shoulder. I jumped a bit, and he met my gaze directly.

Trey spoke, dropping his hand suddenly, like before. “Guess it’s about time to get ready for that date of yours.”

Syd. Shoot! I sprung off his bed and checked the time. I had ten minutes before I was meant to meet him. I shrugged out of my T-shirt, quickly folded it, and slipped on a causal black shirt. Patting myself, I calculated what else I needed. I turned around, and Trey held my wallet out to me.

I shoved it in my pocket and found my keys, slipping those in behind my phone. “Right. I gotta run.”

Trey opened the door wide, but as I passed him, he stopped me, one hand curled around my wrist. His warm breath tickled my neck, and, in the lightest of whispers, he said, “Don’t sleep with him.”

About Anyta Sunday:
A bit about me: I'm a big, BIG fan of slow-burn romances. I love to read and write stories with characters who slowly fall in love.

Some of my favorite tropes to read and write are: Enemies to Lovers, Friends to Lovers, Clueless Guys, Bisexual, Pansexual, Demisexual, Oblivious MCs, Everyone (Else) Can See It, Slow Burn, Love Has No Boundaries.

My books have been translated into German, Italian, French, and Thai.