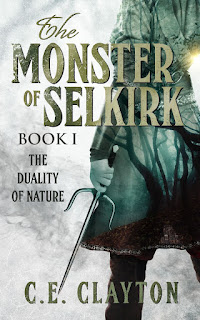 Monsters come in many forms, and not everyone knows a monster when they see one. After three hundred years of monstrous, feral elves plaguing the island nation of Selkirk, everyone believes they know what a monster is. Humans have learned to live with their savage neighbors, enacting a Clearing every four years to push the elves back from their borders. The system has worked for centuries, until after one such purge, a babe was found in the forest.
As Tallis grows, she discovers she isn’t like everyone else. There is something a little different that makes people leery in her presence, and she only ever makes a handful of friends.
But when the elves gather their forces and emerge from the forests literally hissing Tallis’s name like a battle mantra, making friends is the least of her troubles. Tallis and her companions find themselves on an unwilling journey to not only clear her name, but to stop the elves from ravaging her homeland.

Tallis’s mind was racing as they went. There was something much bigger than anything they had anticipated at work here. She just didn’t know what it was. She was holding so many pieces of the puzzle and yet none of them fit together to make a whole picture, and yet, she was somehow in the center of it all.

As she walked beside her cousin, weapons at the ready, she whispered, “Why haven’t we come across more elves?”

Donovan gave her a strange look. “What? The ones we have come across haven’t been enough for you?”

“But that’s just it,” Tallis added quickly. “We’ve really only encountered the one and a score of deranged animals. Everyone says that the forests are crawling with elveswhen you get this far in, and yet we’ve seen blessed few. Doesn’t this seem, I don’t know, just a little bit odd to you?”

Donovan was silent for a long while. Tallis could not tell if he found her questions annoying because they were silly, or because they genuinely caused him pause.

Just as Tallis gave up that her cousin would ever respond to her, he said, “Ever since Aunt Lana died I have said that the elveswere changing in their behavior. For whatever reason, they were going back to old camp sites and deciding to fight to the death rather than flee like they used to. For three years I’ve had to listen to my commanding officers and even my fellow knights tell me I was delusional, and I would be stripped of my position if I kept harping on about being vigilant against a threat they couldn’t see. Even you seemed reluctant to believe me when I said that danger was approaching. But now you see it, the elvesare seeping across Selkirk like a wave that cannot be stopped until it has washed its corruption over everything we hold dear. I don’t find this behavior odd Tallis, I find it expected.”
About the Author 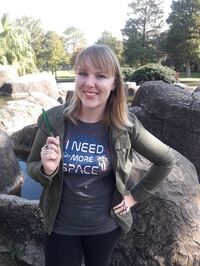 C. E. Clayton was born and raised in the greater Los Angeles area, where she attended the University of Southern California for both her Bachelors and Masters, and then worked in the advertising industry for several years on accounts ranging from fast food, to cars, and video games (her personal favorite). After going the traditional career route and becoming restless, she went back to her first love—writing—and hasn’t stopped. She is now the author of “The Monster of Selkirk” series and her horror short stories have appeared in anthologies across the country. When she’s not writing you can find her treating her fur-babies like humans, constantly drinking tea, and trying to convince her husband to go to more concerts. And reading. She does read quite a bit. More about C.E. Clayton, including her blog, book reviews, and poetry, can be found on her website. She'd also be thrilled if you followed her on Instagram and liked her bookish and pet photos, and Amazon where you can get updates on her new releases. And there's always Facebook, if that's your thing.
a Rafflecopter giveaway