Review - Jaws of the Wolf by Charlotte Jardine 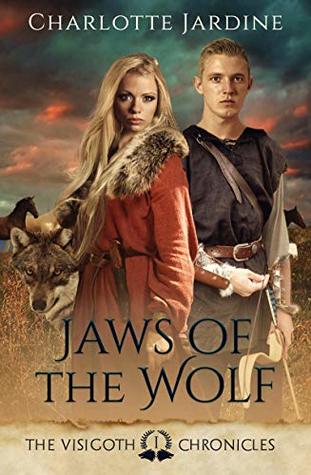 He’s her father’s slave. She’s promised to another. But war changes everything.
Tervingi Territory, 376 AD. Gelvira dreams of becoming a powerful jeweler. But the arrogant son of a tribal elder wants her for a wife instead. After a Hun raid sends her people into exile, her chance to master the ancient secrets of her craft are stripped away…
Adafuns yearns to become a great warrior and win Gelvira’s affection. But as a slave in her father’s service, he has little chance of either. Captured and carried off by the Huns, Adafuns’ dream of being a warrior could come true… at the cost of losing Gelvira forever.
With her people starving, marrying the tribal elder’s spoiled son may be Gelvira’s only hope to save her family. Will Adafuns reunite with the exiles in time to free Gelvira from her loathsome vows?
Jaws of the Wolf is the exciting first novel in the epic Visigoth Chronicles series of YA adventures. If you like strong heroines, thrilling action, and rich historical detail, you’ll love Charlotte Jardine’s page-turning saga.
Book Breakdown
I received this novel in exchange for an honest review. In no way does this effect my opinion of the story itself.
Gelvira just wants to make jewelry, not be a wife that just cooks and cleans but her family has other ideas for her... but when the Huns attack, things change. She ends up in a place she never thought she'd be. Gelvira is an alright character but she's rather self centered, which I guess makes sense considering how she was raised but it doesn't make her likable.
Adafuns is a slave that dreams of being a warrior and getting Gelvira as his own. He's a very determined young fellow with a sweet heart. I loved watching his growth with the Huns and how he finds himself.
Now, I want to start this off by saying that this isn't a bad book, just not a book for me. I thought there would be more romance but our couple is only together for like the first 10% of the book and for for me, that's not cutting it. Now, the writing is great, the story is pretty action packed and will keep your attention. I love the fact that's set in in this time frame (376 AD). I wish more books would do that. Yes, there are salves in this story, so you've been warned.