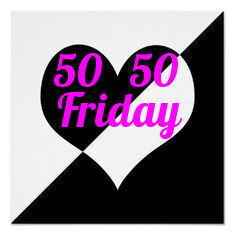 50/50 Friday is hosted here and over at Blue Eye Books
What is 50/50 Friday?
Everyone has a favorite and then we also have something we dislike. Like a coin, there are two sides to every question. Example: best sequel you've read/worst sequel you've read. So that's what 50/50 Friday is all about. We will have a new topic every Friday. If you have have ideas for this meme don't be scared to let me know!
Topic for the Week
I've chosen one from 2017. Which I thought was a fun topic.
Freebie! - Most/Least Likely to go Running in Sleet
Least Likely - Mimi Force (Blue Bloods Series)
She cares WAY too much about how she looks to ever ruin her outfit by running in sleet. Most Likely - Daemon Black (Lux Series)
He loves to run and being what he is, I doubt sleet would slow him down any. Topic for Next Week
Freebie!
You are invited to the Inlinkz link party!
Click here to enter