Panic Attack: Young Radicals in the Age of Trump by Robby Soave - Review 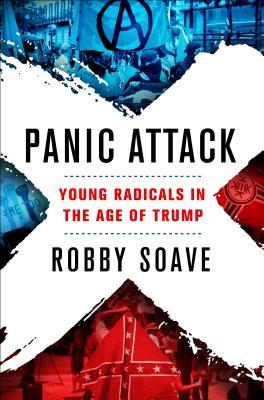 Since the 2016 election, college campuses have erupted in violent protests, demands for safe spaces, and the silencing of views that activist groups find disagreeable. Who are the leaders behind these protests, and what do they want? In Panic Attack, libertarian journalist Robby Soave answers these questions by profiling young radicals from across the political spectrum.

Millennial activism has risen to new heights in the age of Trump. Although Soave may not personally agree with their motivations and goals, he takes their ideas seriously, approaching his interviews with a mixture of respect and healthy skepticism. The result is a faithful cross-section of today's radical youth, which will appeal to libertarians, conservatives, centrist liberals, and anyone who is alarmed by the trampling of free speech and due process in the name of social justice.

My rating: 4 of 5 Pink Sticky Stars

*I received this for free in exchange for an honest review*

I don't think this was quite the right book for me, not because it's a bad book but because I already knew everything the author was talking about. I've been following all the 'radical' news since it started to effect the book community. So I know just how... passionate these kind of people are. Now, I will say that it also talks about the alt-alright and discusses them as well. What I loved was how he showed the older generations and how they went after things and how my generation does it today. That was awesome. While I don't agree with everything the author says, it was pretty nifty seeing some of this stuff through another's eyes. As long as those are eyes are still reasonable and not so far gone down the rabbit hole on either side.

“I think of safety as the right of every person to leave their house or to leave wherever they live, to walk this world and to feel safe and comfortable in their own skin, in their own ways that they identify, and to not fear violence, not fear prejudice, not fear discrimination, to not fear being bothered or to not fear living."