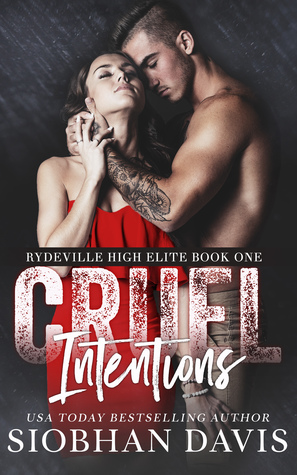 In the power struggle between two elite groups, one feisty girl will bring them to their knees…

Life is a cruel game where only the most ruthless survive. It’s a truth my mother rebelled against, and she paid for it with her life. Now, I play their game. Publicly accepting the destiny that lies in wait for me when I turn eighteen.

But, behind closed doors, I plot my escape.

Trent, Charlie, and my twin, Drew, rule the hallways of Rydeville High with arrogance and an iron fist. I execute my role perfectly, hating every second, but they never let me forget my place in this world.

Everyone obeys the rules. They have for generations. Because our families have always been in control.

Until Cam, Sawyer, and Jackson show up. Throwing their new money around. Challenging the status quo. Setting hearts racing with their gorgeous faces, hot bodies, and bad boy attitudes.

Battle lines are drawn. Sides are taken. And I’m trapped in the middle, because I made a mistake one fateful night when I gave my V-card to a stranger in a blatant F you to my fiancé.

I thought it was the one thing I owned. A precious memory to carry me through each dark day.

I couldn’t have been more wrong.

Because the stranger was Camden Marshall, leader of the new elite and my perpetual tormenter. He hates me with a passion unrivaled, and he won’t be the only one. Fire will rain down if the truth is revealed, threatening alliances, and the power struggle will turn vicious.

My life will hang in the balance.

But I’ll be ready, and I’m not going down without a fight.

1 out of 5 Pink Sticky Stars

*I was given an ARC in exchange for honest review*

I hate having to post this because now I'll probably be off the review team and that sucks. But I will ALWAYS be honest with my thoughts and opinions. I've only read one other book by this author and I really enjoyed it. It was a cute new adult romance that I really need to reread because I liked it. But this one... I have two hard limits when it comes to books. Cheating and drugs. Drugs are used so much that my three strike rule went out the window at 17% into the book. Which sucks, I still kept reading because I felt it was my duty but I knew then and there is was going to get a bad rating.

That's not it though, the characters.... they are all freaking awful. Every. Single. One. There were no characters in this story I enjoyed or related to. They were all so nasty and mean to each other. I think this book was trying to be like Paper Princess or Punk 57 but it failed horribly.

The main girl we follow, whose name I've already banished from my mind, is trapped in this marriage-to-be because her father is an elite bastard who should have his kids taken away and be locked in prison. He lets his best friend (the father of her fiancee) grope his daughter... freaking walks in on her and doesn't even care. It was vile and nasty.

Now normally, I like sex it my books, makes it feel more real but this was overkill! Every little thing was about sex or they were talking about sex. There was even a scene where the MC is being pushed against a tree and things went down in front of the whole group, orgies, violence, just rather disgusting dialogue.... this book has it all. Her brother doesn't give a crap that his twin sister's fiancee is abusive to her. Just tells her to open up to him. Everyone just wants to sleep with the MC. That's it. No one cares about each other.... just sex.

The writing is really good, I found one continuity error that I'm sure will be fixed in the final version, so that's not a big deal at all. Honestly, while this book is not for me. It maybe for you, so give it a go if it sounds interesting to you. I hope you get more from it than I did.