The Flight of the Eagle - Wattpad Novel 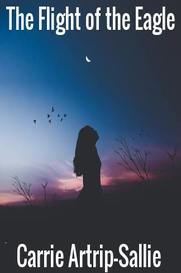 There it was, GoldenGale, the capital of Lorian. I could see the High Lord’s castle just up ahead, the high brick walls taller than any other building I’d ever seen. It took my breath away.
The sun was hidden by the castle, since it was just past daybreak. It didn’t matter, I could make out every detail of the land below. Tents were pitched all around the castle, in order of their Clan’s power.

Lightning stomped his foot, no doubt wishing to get rid of my weight. We’d ridden hard for a whole week, five long days just to be here. I swung my leg off and landed easily on my feet, rubbing his face, “better boy?”

He neighed in answer, a smile lifting my lips at the sound. My thighs were swore and stiff but even that could not ruin my mood. For after seventeen years, in the month of Petrum, I, Sapphire Raine, was seeing something most Second Daughters never got to see.

Lightening followed behind me, I didn’t have to even tug his reign as we made our way through the tents, most of them smaller on this end where the clans O’Longeneh and Starabon had settled.
The ground was soft from the summer rains, mud covered my boots, mother wasn’t going to be happy with me. That caused that all too familiar feeling of anxiety to swim through me, butterflies flying in my stomach. When they’d ask me to come, they had said it was so important, that something had gone wrong. Was it father? Since he’d broken his leg a few years back, he’d never been the same.

I kept my head down once we finally reached the the tents of the Six. These tents got bigger as I passed each one, most had servants running around emptying pots or hanging up clothes to dry on the line.

I didn’t want anyone to think I was Lyanna. Though I’m sure if they knew her, they’d know she’d never been caught in pants. Still, better safe than dead. Lightning bristled at me when I stopped after seeing the familiar red banner, with the slight breeze it seemed like the eagle was flying.
With the promise of an apple, I tied Lightning to the small post and dinged the silver bell that hung outside the tent. Amannah’s face greeted me, the smile falling off her face when she spotted me, “Be careful.”

Before I could ask her what was going on, her fingers closed around my wrist and gently tugged me inside. A fire burned right in the center of the space, lavish pillows all around, a metal kettle sat over the fire. It was much more roomy than one would think just by looking at the outside.
Father’s sword lay near my feet, a sword he hardly ever used anymore, no need when he had me. I clutched my own daggers at my sides, eyes moving to the enclosed sleeping areas. “Are they not here?”

Amannah shook her head, brown hair whipping around her small face. She was the only servant they’d taken with them, I wondered if it was because she had been my closest friend whom I’d not seen for three months, since they’d come here.

“They are dinning in the hall with the High family.” She pointed to the teapot, “Shall I make you something to drink?”

I cocked an eyebrow, “I can make my own tea, you know this.”

The ball in my stomach tightened, why was she acting this way? What was wrong? I began to remove my boots, thankfully mother wouldn’t see how dirty they had gotten, that was a plus.

“Sapphire,” She bit her lip, fighting with herself wether to speak or not.

I placed the boots just outside the tent, with the intent to clean them after washing and changing my clothes.

This wasn’t like Amannah, she’d never been hesitant to tell me anything. We’d shared everything, “Tell me.”

She opened her mouth to speak when the tent flap was moved and father limped into the space, mother and Lyanna right behind him. His blue eyes seemed to brighten when he saw me, that was rare.

“You’re here.” Mother said, motioning at Amannah to make tea while she sat on the pillows, fanning her face. Mother was stunning, even now in her older age, men still stole second glances at her. She was blonde and thin with long legs and dark blue eyes that reminded me of my favorite pond back home.

I nodded, silence was better when it came to my parents.

Lyanna embraced me, nearly squeezing the life from me. “I’m so glad to see you! These past three months have been agony!”

I returned her hug, studying her face as she pulled away. It was like looking into a mirror, her nose was small and straight, lips full, with the top lip slightly smaller. Expressive eyes like mine but there were two differences between us. She had freckles all across her face while mine were planted just on either side of my nose.

Father grunted as he sat down on the largest pillow. We got our coloring from him, his red hair short but beard nearly down to his chest. “Come here girl.”

I thought he was talking to me but it was Amannah he was addressing, her eyes downcast as she approached him, “You will draw me a bath and wash me when all this is taken care of.”

My heart fell into my chest, no, there was no way he’d use Amannah, she was only 19. That was so young… “Father,” I started.

I didn’t move, crossing my arms over my chest, “I can hear your words from right here.”
Lyanna inhaled swiftly, hand squeezing mine, I didn’t care. I’d taken his wrath more than once and it still never changed me.

“Insolent girl!” Mother said, “There is no way this will work.”

“What will work?” I asked, tired of being kept in the dark, anxiety giving way to anger.

Father’s lips lifted into a smile, “You’ve been given the chance to help this family and your sister.”

Amannah moved in front of father to grab the tea kettle, pouring water into a metal cup my mother held. Her eyes flickered to mine, a warning in those deep browns. She made sure her shabby red dress didn’t touch my mother as she passed.

“Drengr has announced that his son wants to marry a woman that is equal to him in every way.” Father’s beady eyes glowed in the light for the fire. “He wants a woman who can handle herself on a battlefield and in court.”

I furrowed my eyebrows, “I don’t understand.” I looked to Lyanna, she was biting her lip, making them appear much redder than what the paint on her lips did. “I’m a Second Daughter, there’s nothing I can do. He’ll want a First Daughter.”

“Stupid.” Mother muttered, kicking her feet out over a long pillow, rubbing at the back of her neck.

“Naturally.” Father said, “But you’re going to help Lyanna win him over.” His grin turned dark, “You will pretend to be your sister when it comes time to show off her fighting skills.”

I pulled my hand from Lyanna’s, taking a few steps back till I was against the tent, “That’s against the law.”

Suddenly it was too hot in the tent, I needed air, had to breathe, they were asking me to risk my life, all for the sake of power. Was this family not strong enough? Clan Raine sat at number three just below clan Massey and the High Lord’s clan. Other clans feared us, wanted to be us. Why was that not enough?

“I love him.” Lyanna whispered, looking down at the earth colored rug beneath her feet. “I’ve gotten to know him a little and he’s perfect Sapphire. It would break my heart to lose him.”

Father smirked at me, knowing I would agree because I’d do anything for Lyanna. I sighed, pushing my braid over my shoulder, “If I do this. You are never to touch Amannah, that understood?” I rubbed my temple, “If I ever learn that you have, I will make sure you never see your daughter as a High Lady.”

That was too easy, I looked to see Amannah shake her head, kneeling on the servant’s white, waiting mat. I’d been played, he’d never touched her, was using that against me. I narrowed my eyes at him, never would I fall for that again.

I hope you liked this little piece. If so, head over to my Wattpad to read the rest of the first chapter. I will be adding a new chapter once a week so look forward to those!