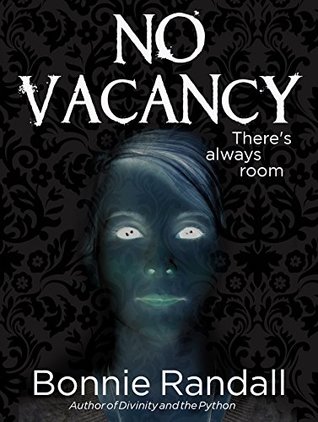 
When therapist Lucas Stephen’s sister returns from a legendary Los Angeles hotel, she’s a shell of the artist she once was. Nearly catatonic, deteriorating rapidly, Michelle alarms Lucas by painting the same old-style straight razor over and over.

Heartbroken and frightened, Lucas resolves to find out what happened to her. With his beautiful—and psychic—colleague Della, Lucas travels to L.A., booking a room in the hotel Michelle stayed at.

They barely cross the threshold when Della senses evil. She sees bodies falling out of the sky. Broken dreams. Imprisoned nightmares. She begs Lucas to leave, but the hotel makes both time and truth shift, and when Lucas looks into the mirror in his sister’s room, he sees the straight razor—and is drawn to the bright, scarlet stain of fresh blood…

Okay so I had no idea what to expect going into this novel because I've never read anything by the author before. But I wanted to read something creepy and this sure sounded creepy so after the author suggested on Twitter her story (I bought the book) I decided to give it a go. It's only $0.99 so not bad. I am so freaking glad I read this!

Now onto the actual book. Dang! From the start you get the feeling that stuff has gone down because through Lucas we see that his sister has lost her mind after returning from a hotel in LA. He wants to know just want happened and with the help of psychic Della they set off.

As soon as they step into the hotel Della senses things that shouldn't be. The story really skyrockets into scary from there! So hold on tight, leave the light on and prepare for your stay in this LA hotel... you might never leave.

5 out of 5 Pink Sticky Stars