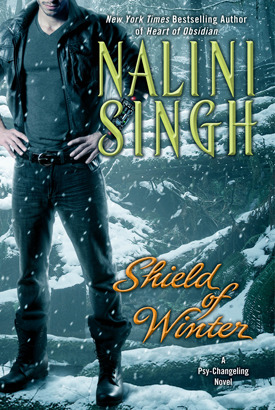 Assassin. Soldier. Arrow. That is who Vasic is, who he will always be. His soul drenched in blood, his conscience heavy with the weight of all he’s done, he exists in the shadows, far from the hope his people can almost touch—if only they do not first drown in the murderous insanity of a lethal contagion. To stop the wave of death, Vasic must complete the simplest and most difficult mission of his life.

For if the Psy race is to survive, the empaths must wake…

Having rebuilt her life after medical “treatment” that violated her mind and sought to stifle her abilities, Ivy should have run from the black-clad Arrow with eyes of winter frost. But Ivy Jane has never done what she should. Now, she'll fight for her people, and for this Arrow who stands as her living shield, yet believes he is beyond redemption. But as the world turns to screaming crimson, even Ivy’s fierce will may not be enough to save Vasic from the cold darkness…

Ivy is an E that can't hold Silence as most Empaths can't. She even had a severe reconditioning but it only helped for a while but now the lock on her mind is killing her.

Vasic is an Arrow with a special gift. He's a TV-V. One of the very few. Left as a four-year-old child to train he's done dark things that he feels he can never recover from.

The PsyNet is dying and with only one hope left. One thing left to try. The Arrows and E's must work together before their race is gone forever. Vasic and Ivy are paired together. Neither ever thought they'd end up falling for each other. Vasic is living on borrowed time with a gauntlet that's malfunctioning and rooted in his brain. Will they lose each other when they just found themselves? Will they save the Psy race? Well, they're sure going to try!

This is number 13 in the series and I'm still loving it! The world-building is fantastic and keeps getting better! The romance is always so wonderfully perfect! This one to me seemed a little less romance based than some of the others and I'm not mad at it.

I loved seeing the other couples from the past books and how everyone is playing into the larger plot. I think this author really knows how to make strong female characters that are still amazingly feminine. They always hold their own and aren't scared to get their hands dirty. I wish more female characters were written this way.

My only 'complaint' with this novel is while I do love Vasic and Ivy, they're not my favorite couple. But I doubt my favorites will ever be bested.