When the Stars Align Blitz + Giveaway 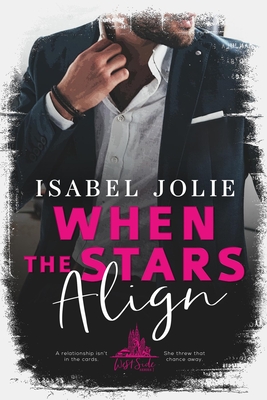 Anna and Jackson meet their last year in Chapel Hill. She’s accepted a job at a respected, award-winning advertising agency in New York City, and he has a position at a prestigious Atlanta firm. Sparks fly, but when he suggests she change her plans, she’ll have none of it. By the time moving day comes, they don’t even share goodbyes.

Four years later, Anna and Jackson meet again in New York City when, thanks to a mutual connection, he moves into her apartment building. She’s a Creative Director at a medium-sized advertising agency. He’s just moved from Atlanta to New York to accept a position at a well-respected law firm.

Anna, friendly to everyone, welcomes him to her city. Jackson has zero interest in repeating past mistakes, and he’s still angry over what she did years ago. But he’s in a new city, she’s his neighbor, and a friendship forms.

With a singular focus on making partner and no interest in exploring a relationship with Anna, Jackson sells her on a friends with benefits arrangement that won’t take them off course. In his mind, it’s a win-win. What could go wrong?

The arrangement works until Anna battles sexual harassment at her agency and the two don’t see eye to eye on how to handle it. Anna cares about her career, and Jackson knows the law and plans to leverage it. The situation forces Jackson to face some realities about his father and life choices. Anna has zero intention of letting him tell her what to do. Both find themselves wondering if they should step back once again and wait for a better day, when their relationship makes sense. A day when the stars align

Her ankle is now visibly swollen. She needs an x-ray. I tell her so, and she disagrees. Typical.

I stand, irritated with her. She needs to see a doctor. “Do you have a first aid kit?”

“Yeah, there’s one under the sink.” She points toward her bathroom.

No need to lose my cool with her. I go to grab the kit so I can clean up her open wounds. If she has a wrap, I can wrap her ankle. Try one more time to convince her she needs to visit a doctor.

I reach into the overstuffed cabinet below her sink. The back of the cabinet is jam-packed with random stuff. The front of the cabinet has two sets of stacked baskets. I glance through the baskets, looking for something resembling a first aid kit.

Tampons. Make-up. Nail polish. Maybe twenty things of nail polish in one basket. Who needs so much nail polish? Does she even wear nail polish? Moisturizer.

I step out of the bathroom and hold it up. “Is this the same one I gave you?”

Anna squeals and grabs the throw pillow she’s lying on and places it over her head. “Oh. My. God. Jackson. Get out of my bathroom.”

Okay. Enough of that. I’m never finding anything underneath her sink. I reach for a washcloth from the rack and run it through warm water. This will have to do.