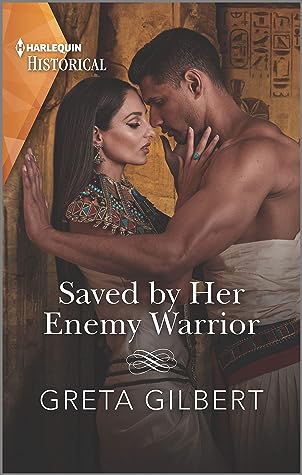 Entombed with her enemy…

Will her heart remain unscathed?

Left to die in the tomb of her beloved Pharaoh Tausret, royal adviser Aya would be silenced forever by those who seek power. But she is not alone! Egyptian soldier Intef is there to steal her mistress’s gold. Now they must work together to escape. This handsome warrior is Aya’s enemy, yet it’s passion not hatred that burns between them. Can their desire withstand the revelations that await them outside?

You have Egypt as your backdrop but you spend around 60% of the book in one tomb?!

First, let's clear the air. I got this book for free in exchange for an honest review but a free book doesn't mean a glowing review. I will be honest, always.

Now, let's start. I'm a sucker for anything to do with Ancient Egypt. I love that period and often feel that I should've been born into that time. So when I saw this, you know I had to read it! The writing is great, the story is kinda cute and it was a very fast read! I thought it ended perfectly.

I just... all of stunning, beautiful, glorious Egypt and you set so much for your short novel in one freaking tomb! Wasted opportunity! I wanted more rich settings, give me the Nile, the palace. Just anything else besides one tomb for over half the book!

I think the book suffered a little from being trapped in the tomb for so long because the author threw so much backstory just to fill the pages. I think the story could've been better had they gotten out faster and we spent more time with her marriage. That part was so rushed... I just felt like it could've been changed a bit and the story would've been stronger.

So not a bad book, just dragged a lot in the beginning and went way too fast at the end.