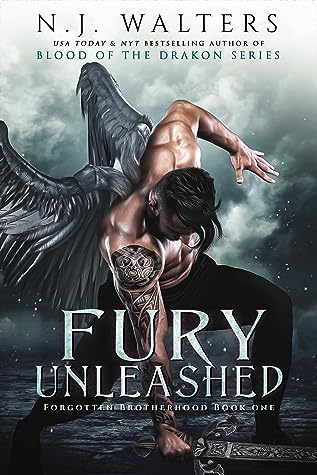 Maccus Fury, a fallen angel, is trying hard to keep his sanity. Seems being an assassin might be catching up with him. Now, Heaven, or Hell, has sent a beautiful assassin to kill him. Lovely. She’s pretending to seduce him, and he’s okay with that. She’s smart and snarky––but she has no idea what she’s walked into. And he’s more than peeved that they only sent one person. They’re going to need an army if they want him dead.

Morrigan Quill is one of Hell’s bounty hunters. She sold her soul to keep her sister safe, and now she’s working off her contract by catching bad guys and dragging them back to hell. Just a hundred years to go. When Hades makes her a new offer––that’s definitely too good to be true––she can’t say no. All she has to do is kill a powerful and crazy-hot fallen angel, who will totally kick her ass in battle.

This is going to be great for those that love the Black Dagger Brotherhood or the Lords of the Underworld series. It follows the same type of format only this time around Lucifer is the big bad.

The writing is great! No problems there are all. There's lots of sex in this book so if you're looking for that, you've found it. Personally, I prefer just a wee bit less sex but it's not a game-changer I just skip the sex scenes after I get bored with them.

The characters are great!!! I loved Morrigan and Marccus and how they came together and learned to trust one another. It's very kinda insta-love.... they sleep together a few times and she's already falling for him. So that's a trope I hate to pieces but this time it didn't ruin the story because there was more going on to keep me reading. I will say that Morrigan got the short end of the stick in life! I feel for her so much because I too would have done anything for my younger sister.

I'm really excited to read the next book because I'm pretty sure it's about a vampire and while I love fallen angels, vampires top everything. So bring on the next book!

I will say that the ending is a good HEA that is really wrapped up in a pretty bow. A bow that really stretched to fit the ending. But hey, I enjoyed it and stayed up late into the night reading even when my brain was freaking out over the covid-19 stuff. So it gets a win in my book!!

*I was given this book in exchange for an honest review*