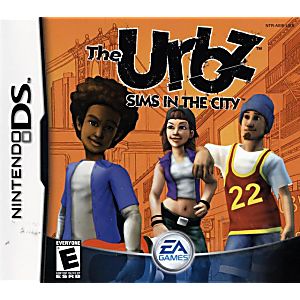 The Sims have moved to the City where there's always action and where reputation means everything. In the Urbz: Sims in the City, you can go to work at such locations as the Sushi Bar, Chop Shop, or Bootleg Fireworks, Inc. Success at work brings promotions, access to new power socials, and gear to influence your new lifestyle. It's up to you whether your Urbz become big-time players on the street or are lost in the crowd. It's all about reputation as The Urbz are living the dream in a City that never sleeps.

This was a game I played as a little one back in the day. It was released holiday 2004 and I didn't get it till around 2007 when I saw my friend playing on her Game Boy Advance. My parents ended up getting me a DS and I played that version of the game. Which isn't much different. This was the first time I ever got to play the Sims but not the first I'd heard of them. I'd had a friend three years older who had gotten the PS Sims game but her parents had taken it away from her because the Sims characters can have sex. Nothing graphic at all. I know in Sims 3 and 4 they just hide under the blankets or go under the water.

It didn't matter though because we both grew up in a very strict religion and it just wasn't allowed. This game was rated E (Everyone) instead of T (Teen) so my parents thought it would be okay. They were right. This game is safe for all ages and so much fun to play!

I spent two or three months on this game and fell in love with the Sims because of it. It's a pretty easy to play game. With the Sims you have to care for their needs and that's true for this game but you've also got missions you need to complete that move the story along. Which is different form other Sims game where it's just open to whatever you want.

In every Sims game you have to have money and here is a really cool system that I love to this day, fun little mini games! From card games, to hidden objects, shooting hoops, and doing a stand up comedy routine. It really breaks up the game and is fun to play.

The game strongly encourages you to make friends with everyone and it some missions you have to reach a certain level of popularity before you can continue. Which I think is good, the characters here are all different and some are quite weird. I think it shows that you can be friends with anyone, you don't have to stay in your own friend group.

Now, being a game that came out in '04, it's not the best looking game but I don't care. Even when I recently played it, I still loved it. It was sure easier to beat this time around though! That's for sure! This game will always hold a place in my heart and it got me to love the Sims!