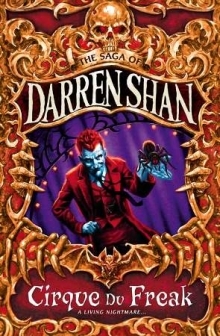 In the tradition of Stephen King's 'Salem's Lot, Cirque Du Freak is the frightening saga of a young boy whose visit to a mysterious freak show leads him on a journey into a dark world of vampires. Filled with grotesque creatures, murderous vampires, and a petrifying ending, Cirque Du Freak will chill, thrill, and leave readers begging for more.

I was an ordinary boy,
until I visited the Cirque Du Freak...
until I met Madam Octa... until I came
face to face with a creature of the night.
That's when my life changed completely.
I don't expect you to believe me, but
everything I describe in this book
is absolutely true...

According to Goodreads, I've read this book five times. So I know I've read it a lot more than that. I still love this series. I found it when it was all finished as a wee little kid and read them all so fast that my parents took me to the book store every single day after school to get the next one. Eventually, they just bought the whole series and let me have at it. Which was better for me.

My partner recently got me the UK boxset because it's so cute and it was on sale! I never pay full price for anything. Not in today's world, there's no use! So when I saw it was on sale, he snapped it up for me.

So, I thought it was time for another reread! This is a middle-grade horror series about vampires! But there's a neat twist to these vampires. They are turned by fingertips, they share blood that way. They also don't live forever, just longer than a normal human. But they do have some neat powers!

This first book follows young Darren as he sneaks off with his best friend Steve and heads off to a freak show. Only Steve happens to notice that one of the freaks is a real-life vampire! He begs the vampire to turn him but he refuses! Darren steals the vampire's pet spider, thinking he can train it to work with him. Turns out the spider sinks it's fangs into Steve when they're playing with her and the only way to save him is for Darren to become the vampire's assistant, thus becoming a vampire himself!

This really sets up the world and story quickly while still telling a great story! Something I love about middle-grade books is that they get right to the meat of it. There's no filler, just the juicy parts I want. Nothing is boring in this book. It's fun, dark, and Darren is a great character!

Now, I need to jump into the next one!