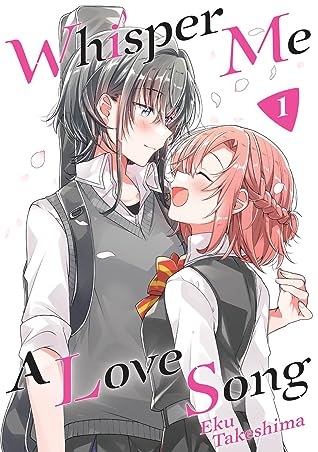 An adorable new yuri manga for fans of Kase-san and Yamada and Bloom Into You. One day, high school girl Himari sees a girl, Yori, sing in a band, and it awakens feelings she doesn't understand... but Yori does!
Bubbly, energetic first-year high school student Himari falls head over heels for her senpai Yori after hearing her band perform on the first day of school. Himari tells Yori she just loves her, and, to Himari's surprise, Yori says she loves Himari back! But when Himari realizes that she and her senpai are feeling two different kinds of love, she begins to ask herself what "love" really means...
Manga Breakdown
I hate to admit this but I've never read an f/f manga. I know! What took me so long! So I set out to change that by picking up this Yuri (what the Japanese call f/f manga) book and give it a go! It's cute and follows our two girls: Himari and Yori when they first meet each other and from there the story goes on. The art is stunning, a little bit childish looking to my eyes but it's pretty.
Not too much happens in this volume because the mangaka was really setting up the characters but I feel in the next volume the story will move along nicely and we'll get to see just what is in store for these two.
***This title was given to me in exchange for an honest review***