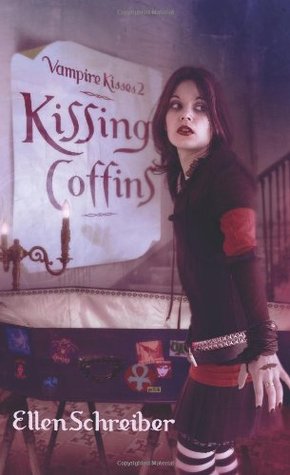 Not far from Dullsville, someone's lurking in the dark. . . .

After meeting the handsome and shadowy Alexander Sterling, goth-girl Raven's dark world has a bright, new glow. But as in her favorite movie, "Kissing Coffins," Raven knows that love always has its complications, especially when Alexander has a big secret to guard.

When Alexander suddenly disappears, Raven leaves Dullsville to begin a dangerous search to find him. Can she stay safe, no matter who--or what--she encounters on the way?

I read this series when I was just a wee little tyke, and even though they were written for a very young audience, I still come back to them every so often. There are so few gothic characters in fiction. Of course, Raven calls herself goth and not gothic but, if you know enough about the subculture then you'll know that Raven is not actually goth but gothic. She doesn't really listen to goth music... only the mention of Bauhaus and then a few heavy rock bands that aren't goth at all.

Not that any of that matters! There I go again, rambling.

The point was, it's nice to read about a gothic character. I really wish we could get more. But I understand that to most goth and gothic is weird and creepy. Some people think we all worship the devil or kill people in our spare time.

So this is why I come back to this series. It's also an extremely easy read. The books are short, the plot is so simple it's not even funny, and everything moves fast. Way fast!

Kissing Coffins follows Raven as she tries to find her vampire boyfriend who has vanished and comes into contact with Jagger, a vampire from her boyfriend's past. Jagger's trying to turn her into his vampire bride forever. They end up keeping Jagger away, but then at the end, Jagger's twin sister shows up.

The whole plot of Kissing Coffins in one little paragraph; the writing helps the pace along, never using too many words to describe anything. The dialogue is pretty cheesy and Raven can be just as narrow-minded as her peers. Still, it's nice to see all the graveyard picnics.

So do I recommend this series? No. Unless you're about 8-12 then I'd say stay away.