All Grown Up - Book Breakdown 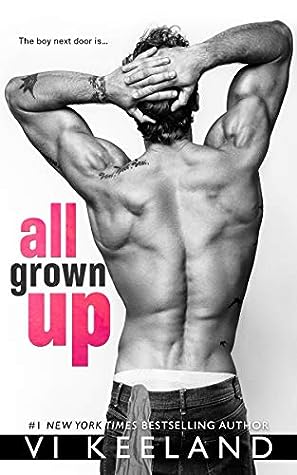 When I first encountered Ford Donovan, I had no idea who he was...well, other than the obvious. Young, gorgeous, successful, smart. Did I mention young? If I did, it bears repeating. Ford Donovan was too young for me.

Nevertheless, that's how I met Ford, and we started messaging. He made me laugh; yet I was adamant that because of his age, we could only be friends. But after weeks of wearing me down, I finally agreed to one date only--my first after twenty years of being with my high school sweetheart. I knew it couldn't last, but I was curious about him.

Though, you know what they say...curiosity kills the cat.

I was nervous going into this book. Because on my TBR I had another book by this author but ended up DNFing it because I didn't care for it. I was hoping to like this one and had my fingers crossed. This book is about a woman whose marriage has ended because her husband was cheating on her. Although, the relationship was kind of dead before that. I honestly have no idea what Val saw in her first husband; he was such a jerk.

With her best friend's help: Val decides to get back out in the dating world and meets a funny guy. They text a lot! When they finally decide to meet, she notices just who he is. Ford is the young man who used to babysit her son when her family would spend time at their vacation home.

She decides she can't date him. Besides, he's too young anyway. But he won't give up, he may be 25, but he acts far older than that. He had to grow up fast when both his parents were killed: Ford was left to take care of his baby sister.

Of course, being a romance novel: it ends with a sweet HEA, only it takes a lot to get there. Val and Ford both have some skeletons in their closets that they'll need to deal with before they can be together.

The writing is fun and fast-moving; no slow parts. I actually started reading this before bed and ended up finishing most of it instead of sleeping. Oops! It was nice to simply escape from real life for a while and lose myself in a cute romance novel.

If you like cute age-gap romance with funny heroes and sweet heroines then this is a good one. The ending was a tad like a Harlequin novel for my tastes, but besides that minor detail, I enjoyed this one!