Titanic - 'Iceberg Ahead': The Story of the Disaster by Some of Those Who Were There - Book Breakdown 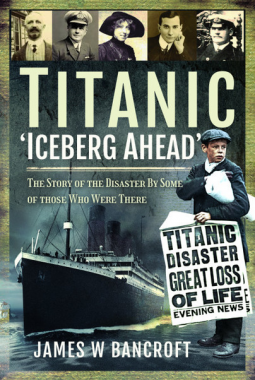 To have sailed on 'the voyage of the century' aboard White Star Line's RMS Titanic - described at the time as 'a floating palace' - was like being one of the first passengers to fly on Concorde.

On 10 April 1912, people from all walks of life began embarking on Titanic, then the largest ship afloat, for what was to be the trip of a lifetime on the ship's maiden voyage across the north Atlantic. Many were looking forward to starting new lives in the United States.

However, just before midnight on Sunday, 14 April 1912, Titanic's crew began to send out distress signals stating, 'We have struck an iceberg'. The liner had been steaming at speed when it collided with an enormous iceberg which stripped off her bilge under the waterline for more than 100 yards, opened up five of the front compartments and flooded the coal bunker servicing one of the boilers.

The damage was fatal, and some three hours after the disaster began to unfold the last visible part of Titanic slipped beneath the waves. There were only sixteen lifeboats and four collapsible dinghies - which was completely insufficient for the number of passengers making the crossing. As a consequence, more than 1,500 passengers and crew died: two out of every three people onboard perished.

Much has been written about the Titanic disaster, and it has been the subject matter for several films. The author is well-known for his depth of research and his attention to detail, and in a new style of format, he has selected fifty people involved in the disaster, and by using their specific eyewitness accounts he has managed to make the confusing situation much clearer, making it possible for the reader to experience the dreadful events as they unfolded. The book also includes biographical tributes to the fifty people, who came from all walks of life and geographical regions, telling who they were, their experiences during the disaster, and what happened to those who were fortunate enough to survive.

So, like most people, I’ve always loved the movie, Titanic. That was my first encounter with the infamous incident, but it would not be the last. I’ve watched many documentaries on the subject. Read tons of books. I devoured whatever I could about this topic. So when I received an email asking if I wanted a free copy of this book to review, I jumped on it!

I thought I knew about all there was on this ship and the tragic tale, but I was wrong! I learned that people actually died during the building of Titanic! Some thought the Titanic was cursed the ship before it even left port!

It’s broken into what I’d say is two parts. One where the author breaks the whole timeline down in perfect details and the other is factual accounts by people who lived through this event. Some of these stories really pull at your heart and I won’t lie, it made me tear up. I just couldn’t imagine...

Honestly, it’s very well written and I love having the whole timeline at my fingertips in one complete book. Which is my favorite part about this book hands down.

If you’re like me, then this book is for you. I fully recommend it. You will not be sorry!