Cameron Wants to Be a Hero - Pride Book Breakdown 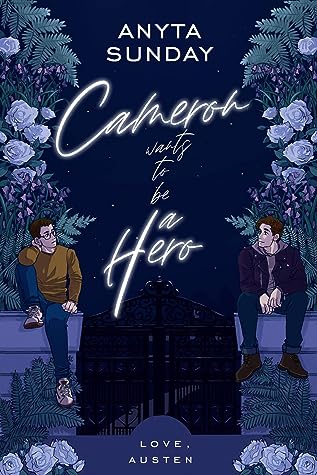 Lake: Did you get his number this time?
Cameron: Yes. But I'm not sure I should use it so soon.
Lake: What's soon? Didn't you last see him yesterday?
Cameron: I thought you're meant to wait three days? Otherwise it looks desperate.
Lake: You are desperate.
Cameron: Thanks.
Lake: From everything you've told me, sounds like this could be something.
Cameron: You think?
Lake: Message him. Keep it sexy.
When it comes to romance books, Cameron Morland can always read between the lines.
When it comes to real romance, he may need a dictionary.
Or Jane.
It's Northanger Abbey, complete with a neo-gothic mansion and charming misunderstandings. But contemporary. And gay.
Book Breakdown
Cameron is a bookworm who kind of lets everyone else control his life while he sits in the background with his book. Therefore, I’m not the biggest fan of bookworm characters in books. Often they’re portrayed as Cameron.... just letting life pass him by while he’s reading.
Now, I know we love to read, but I hope you’re still living your life as well. After all, we only get one.
But when Cameron meets Henry, he actually seems to come alive. Henry just keeps Cameron a secret because he’s not out to his father yet. The end has Henry finally confessing his sexuality to his father after he kicks Cameron out of the house because he finds out about them.
I’m so sad! I wanted my first Pride review to be something exceptional that I could recommend to you but this one... It’s not bad but it’s just kind of blah. The only emotion that this book brought out in me is from the two siblings that just wouldn’t stop.
I don’t even remember their names... Bitch and Creepy works for me. Creepy would not stop trying to get into Cameron’s pants. Don’t even get me starting on the cheating Bitch! They were horrid, but I know that was the point. So well done to the author!
I’ve never disliked an Anyta Sunday novel, so this sucks. I don’t recommend this one but I suggest any of her books in the Signs of Love series. All of those are 4-5 star reads!