Falling for the Highlander - Book Breakdown 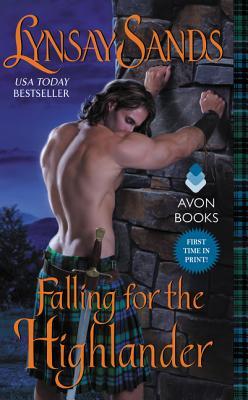 Lady Murine Carmichael has known her share of bad luck. But when her debt-ridden half-brother tries to sell her off in exchange for a few Scottish horses, it’s the final straw. If keeping her freedom means escaping through harsh countryside alone, so be it. She has barely begun her journey when she lands an unlikely escort—the brawny Highlander who just refused to buy her virtue.

Dougall Buchanan was disgusted by Lord Danvries’ shameful offer, but Murine herself tempts him beyond measure. Even bedraggled and dusty, the lass glows with beauty and bravery. Dougall wants to do more than just help her flee. He wants to protect her—with his life and his heart—if she’ll only let him. For Murine may be pursued by a powerful foe, but nothing compares to the fiery courage of a Highlander in love.

Meh. I could sum up this entire book with that one word. It’s not a terrible book, but it’s nothing special. Murine lives with her half brother but when he offers her company in exchange for some horses... she runs away and comes across the group of men who turned down the offer her half brother made.

Then the biggest part of this book is every single highlander just lusting after Murine and I do not know why. She’s kinda boring. She’s brave, but that’s about it. But eventually Dougall sets his sights on her and that’s it. There’s a murder mystery going on, but it’s so easy to figure out and doesn’t add much to the story.

It’s a cute book that I enjoyed reading but it was so easy to put down and come back to later and I didn’t think about it when I wasn’t reading it.

It’s well written and reads quickly. I loved reading the highlander way of talking, it’s something that used to take me forever to read but Outlander really helped me pick up speed and understanding with the dialogue.

Do I want to continue this series? Yes! I do. I just hope the others are better.