Harry Potter and the Order of the Phenix - Book Breakdown 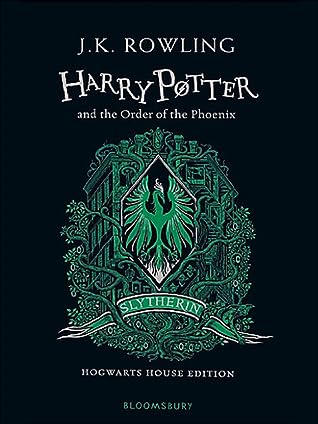 There is a door at the end of a silent corridor. And it’s haunting Harry Pottter’s dreams. Why else would he be waking in the middle of the night, screaming in terror?

Harry has a lot on his mind for this, his fifth year at Hogwarts: a Defense Against the Dark Arts teacher with a personality like poisoned honey; a big surprise on the Gryffindor Quidditch team; and the looming terror of the Ordinary Wizarding Level exams. But all these things pale next to the growing threat of He-Who-Must-Not-Be-Named - a threat that neither the magical government nor the authorities at Hogwarts can stop.

As the grasp of darkness tightens, Harry must discover the true depth and strength of his friends, the importance of boundless loyalty, and the shocking price of unbearable sacrifice.

His fate depends on them all.

I’ve been continuing my read though of the Harry Potter books and in September I read the longest book in the series. It really is very long! Not long in word count, but it really drags. There are so many truly horrible things that make this book so hard to get through.

Let’s start with Umbridge. I think she’s worse than Voldermort. He just wants to  kill everyone and live forever. Umbridge takes joy in hurting little kids. That’s just messed up on so many levels.

Very few good things happen in this book and I think that’s what makes it so hard to get through. There were parts where I just had to put the book down because I couldn’t keep seeing Harry and his friends suffer.

I do like the writing style. It’s getting better with every book and that is something I enjoy about these later stories.

This is the story where we get to see Sirius die and I thought I’d be torn up over his death, but after seeing Snape’s memory… he was a bully, along with James. I can’t be sorry to see a bully leave the world. I don’t care if he ‘grew’ out of it. Once a bully, always a bully, that’s been my personal experience.

I’m thrilled to be finished with this book. Hopefully, the next one isn’t as dark.