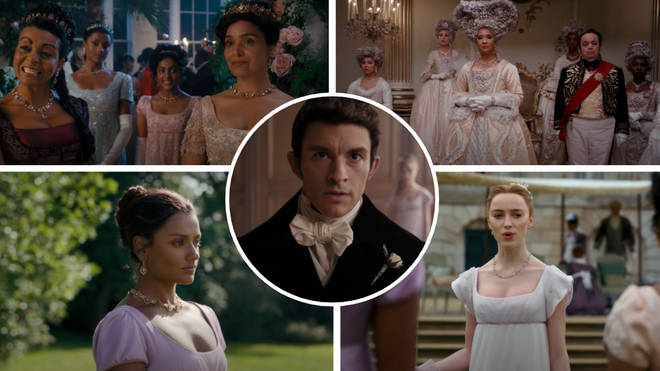 I would like to start off with the positive.

1) The sets are stunning!

2) The actors are fantastic! Everyone did such an amazing job! The chemistry between the leads was great!

3) The clothes!!!! Ugh, so pretty! I could go on and on with just how much I love the fashion!

4) My love for the Queen and Lady Danbury just grows stronger and stronger every time I see them.

5) I adore how bright everything is. So many new series/movies coming out are dark and gritty, so I love this breath of fresh air.

6) Lady Featherington is a badass that doesn’t let anyone stand in her way. I admire her for that even if her methods aren’t always the best...

Now... onto the negatives.

1) They threw the book out the window. I love The Viscount Who Loved Me. It was a solid 5 star read for me, so I was hoping they’d follow more of it.

2) Now, for most of these negatives, it’s just stuff I dislike. Except this one. I really, really hate this one. What they did to Kate and Edwina’s relationship just gutted me. That was something I loved about the book. They were so close and I envied having a relationship like that with one of my siblings.

3) Kate and Anthony took a backseat in their own love story. It got to where I would rather watch the side characters than them because they would just not stop standing in their own way and being ridiculous. Kate would not get over herself and Anthony wouldn’t pull his head outta his behind.

4) They made Eloise a selfish brat. I adored her in the first season. A strong woman who wants to make her own way rather than do what is told of her, yes, please! Here... she just felt like a spoiled little girl who only cared about herself. Leaving her brother’s wedding for her own desire? There was another time when her mother wanted the whole family strong and united and Eloise said she’d be late and ran off to do what she wanted. That’s not the close knit Bridgerton family I adore.

5) How Anthony treated Daphne when she was only trying to help. Telling her she was born to marry into another family, but he had to carry on the Bridgerton name. It felt as if he was saying she was no longer a part of the family and should shut the f**k up. She can’t know better than him. I didn’t like his condescending manner there. I wish Simon had been there to punch him in the face or something.

6) I hated how rushed the ending felt. Kate and Anthony didn’t get together until the last ten minutes of an 8 hour show and everything felt rushed. I would’ve liked to see them get a little more happy times before it ended.

I honestly don’t know what happened, but the first three episodes were fantastic! I loved them and then it sorta felt like the show twisted into something else. After I watched season one and fell head over heels for it... I had such high hopes for this season and I’ll just say that I’m glad I didn’t waste one of my skips from school.

Now, I ask you, have you seen this show yet? Do you like it? Tell me below!