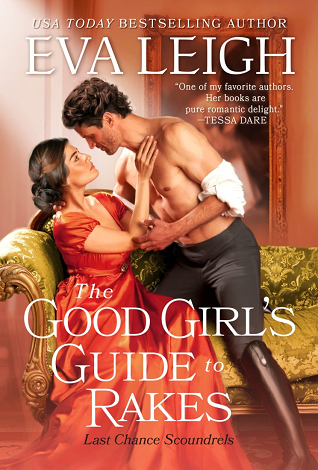 When Kieran Ransome’s latest antics result in a massive scandal, his father issues an ultimatum: find a respectable wife or inherit nothing. But as one of London’s most inveterate scoundrels, Kieran doesn’t know any ladies who fit the bill. Or does he?

Celeste Kilburn is a society darling, beloved by influential members of the ton. But keeping a spotless reputation leaves little room for adventure and she longs to escape her gilded cage, especially with her impending engagement to a stuffy earl. When Kieran—her older brother’s best friend and an irresistibly attractive rogue—begs for her help, Celeste makes a deal: she’ll introduce him to the right social circles if he’ll show her the scandalous side of London.

In between proper teas and garden parties, Kieran escorts Celeste—disguised as “Salome”—to rowdy gaming hells, wild fêtes, and sensual art salons. As they spend more time together, their initial attraction builds to a desperate desire that neither can ignore. But when someone discovers their midnight exploits, Celeste’s freedom and reputation are endangered, and Kieran must save the woman he loves… respectable or not.

Celeste is a good girl. Since her family came from nothing, their reputation rides on her shoulders. Which means she’s going to marry into a titled family. Sadly, she doesn’t love the man and just wants to be free.
Kieran is a rake, and his family has had enough. They told him to wed a good girl or get cut off from the family. So he needs a good girl to help him change his reputation.
These two make a deal. Celeste will help Kieran and in return, he’ll show her freedom. They develop a friendship that quickly spins into much more. Then they have to fight off their feelings because they know no one would allow them to work for them. But sometimes love has a way of changing all your plans.
As the two put their plans into action, they can’t help but give into the lust between them, and it develops into something neither can ignore.
I really enjoyed this book, found it very hard to put down, but what keeps it from being a full five star story is the ending. Now, it’s a romance and by now, everyone who reads romance knows that you get an HEA and that’s something I adore about romance but this ending was just too rushed... the rest of the story’s paced very well but the ending just seem to run full steam ahead with no breaks and it felt out of place. I think the author should’ve extended it a little and given it some room to breathe.
That being said, a wonderful book in a new series and I can’t wait to read the rest!